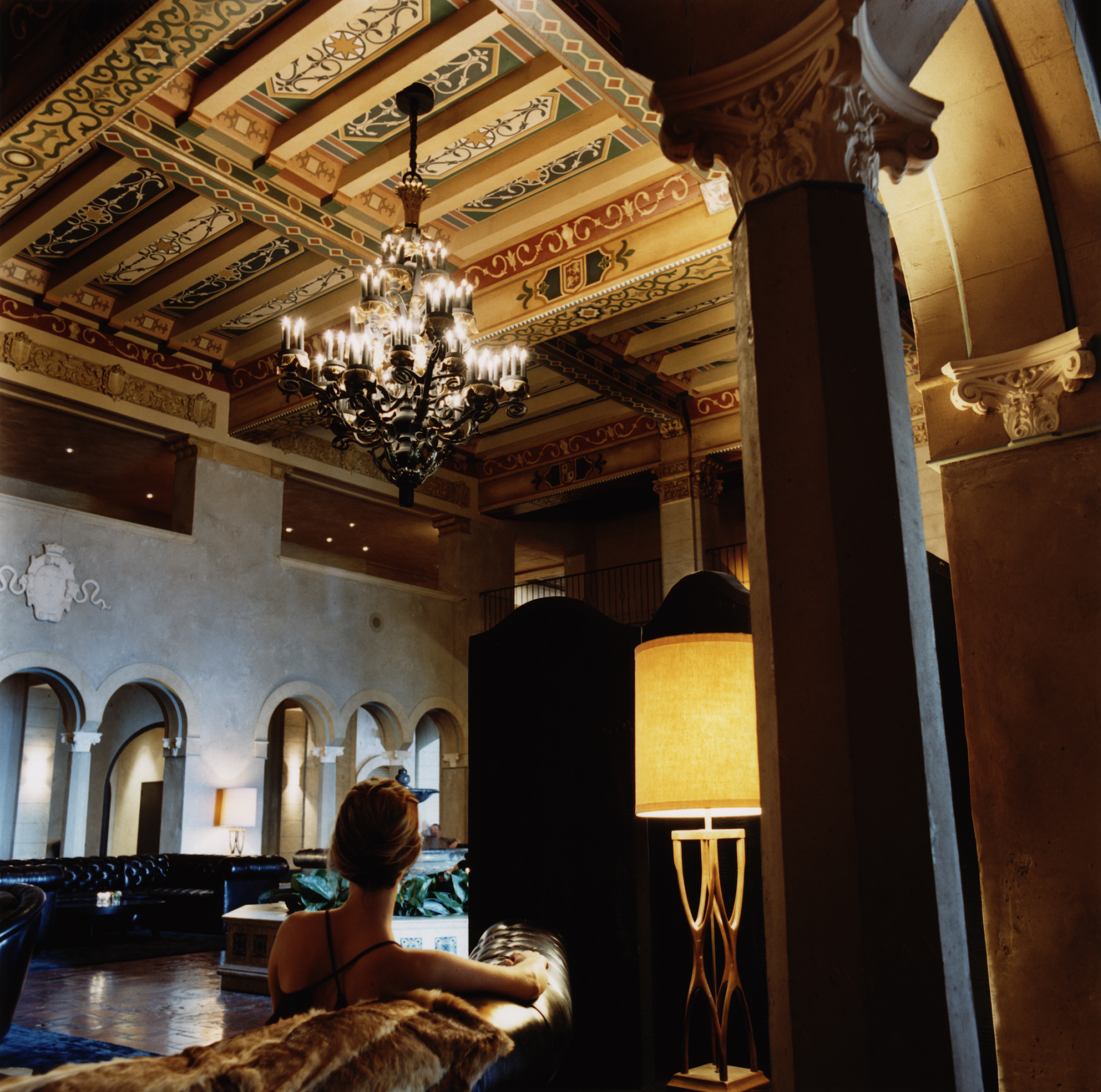 With their often emerald green facades, puzzles of acutely angled shapes, and starbursts of gold or platinum, the buildings that sprung up during the Jazz Age-era of Art Deco architecture are synonymous with Old Hollywood. And a walk around today’s Hollywood streets will still show traces of the style moderne architecture.

The Hollywood Roosevelt might have been built in the Spanish Colonial Revival style of architecture, but small touches are a reminder that firm Fisher, Lake & Traver completed the hotel in 1927. Cubic shapes adorn the ceiling of private banquet hall, the Blossom Ballroom, and an iron staircase descends from hotel’s balcony into its sprawling lobby. And, where it lacks in that era’s design, it makes up in its history. A playground for the Hollywood elite of both yesterday and today, the Roosevelt was not only financed by a group that included old-school heavies like Louis B. Mayer, Mary Pickford, Douglas Fairbanks, and Sid Grauman, it also hosted the first Academy Awards. And it’s about a mile down the street from the Pantages Theatre, another former home of the Academy Awards ceremony. Designed by Marcus Priteca and opened in 1930, the glittering chandeliers and mirrors that adorn the Pantages’ rich red lobby are added bonuses of catching a musical at this former vaudeville and movie house. 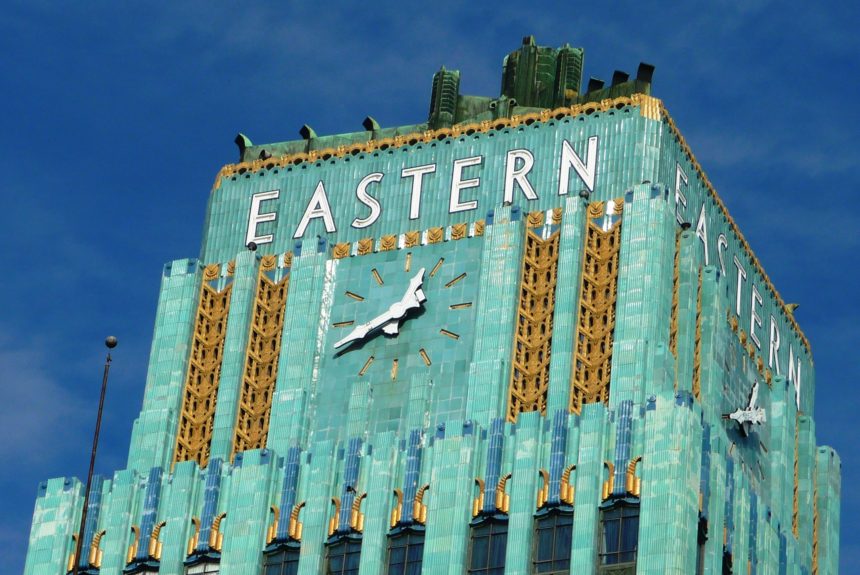 Yet Hollywood isn’t the only neighborhood of Los Angeles where buildings still exist that showcase the Art Deco movement. The Los Angeles Conservancy’s walking tours of downtown offer some of the best chances to grasp the history of the city and the architects who built it—be it glimpsing the cubic-patterned, steel-framed One Bunker Hill building designed by firm Allison & Allison in 1931, or the 13-story turquoise terra cotta-trimmed Eastern Columbia Lofts that Claud Beelman completed in 1930. Head inside the Los Angeles Central Library, which was first built by Bertram Grosvenor Goodhue in 1926. Although expansions and remodels of the building now mean it reflects several architectural genres, the rotunda on the second floor shines bright from a sunburst at the top of its domed ceiling. Or see Art Deco and other architectural designs inside Union Station. A certified entry on the National Register of Historic Places, the rail station was partially designed by John Parkinson and Donald B. Parkinson and it has been greeting visitors to Los Angeles since it opened in 1939.

Near Los Feliz, the white-domed Griffith Observatory is often associated with its iconic film resume (i.e. Rebel Without a Cause, among many others. Not that it’s bragging) and its offerings of spectacular celestial views. But the building itself isn’t too shabby either. With its architecture design overseen by John C. Austin and Frederick M. Ashley, the Observatory opened in 1935 and is known for its extensively labored artwork like the Hugo Ballin ceiling mural depicting classical mythology as well as its Grecian-style white exterior and green doors. Also in the area, the Church of Scientology’s West Coast headquarters operate inside the brilliantly blue former Cedars of Lebanon building on Sunset Boulevard. The behemoth, nicknamed the Complex and originally designed by Beelman, is one of the many historic Los Angeles buildings owned by the church.

“…Griffith Observatory is often associated with its iconic film resume (i.e. Rebel Without a Cause, among many others. Not that it’s bragging.)…”

Out west in Santa Monica, the Art Deco style is evident as soon as you can see the Clock Tower near the Promenade. The Walker & Eisen-designed white structure is hard to miss, as it’s the tallest skyscraper in the beachfront city. But it’s not the only one with Art Deco architectural heritage. There’s also the Bay Cities Guaranty Building (also known as the Crocker Building and also designed by Walker & Eisen). Buildings like the Sears Roebuck Store (designed by Rowland H. Crawford and completed in 1946) and the former home of Merle Norman Cosmetics (designed by H.G. Thursby and completed in 1936) showcase the period’s Streamline Moderne designs. There’s even a block of stores housed in one building on Wilshire Boulevard that is known to locals as the Art Deco Commercial Building. This was designed by architect Irvin Goodfellow and completed in 1928. 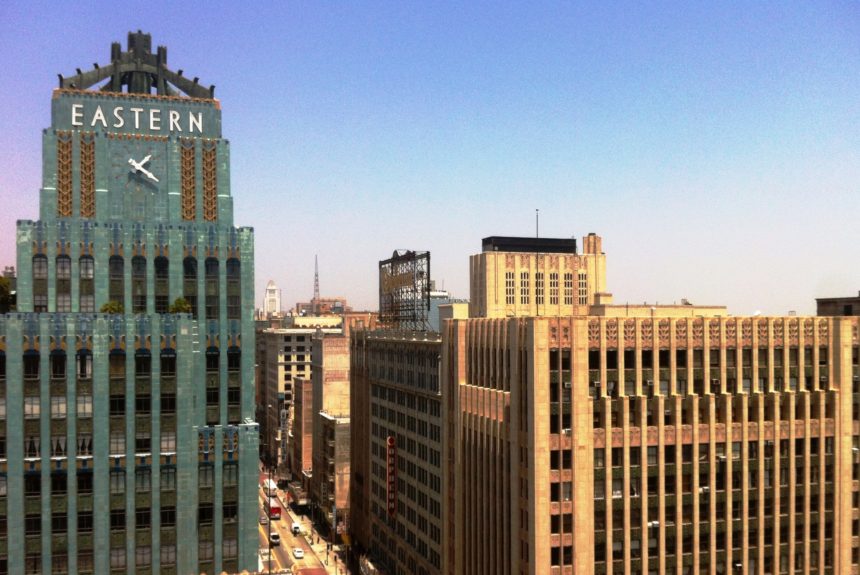 Mid-city venues like architect Stiles O. Clements’ towering Wiltern on the corner of – you guessed it – Wilshire and Western, and architect Clifford A. Balch’s vibrant El Rey on Wilshire, were both built in the 1930s and are now happening live music spots. In between them on that major thoroughfare is a building that so embraces its roots that it’s named the Deco Building. One of the few remaining black-and-gold Art Deco structures in the city, it was completed in 1929 by Morgan, Walls, and Clements and now hosts private events – a perfect reminder that Los Angeles might have a stereotype about showing its age, but sometimes it likes to celebrate it.