Sita Abellán is a rising star Sita Abellán is a model, a DJ, and a creative force. She grew up in Murcia, a Mediterranean city in southeastern Spain, using Tumblr to find a wider community of fellow ’90s kids and techno princesses, and caught the eye of style icons like Rihanna and Jeremy Scott along the way. Now, the twenty-something ‘Bitch Better Have My Money’ music video sensation travels the world playing techno and just walked at one of the most high-profile shows of Paris Fashion Week.

During her recent stay at The Hollywood Roosevelt, we sat down to chat with her about feeling like a fashion freak, modelling for Rihanna, and what inspires her to create.

Tell me about yourself and your career so far, how did you get into modelling and DJing?
I started modelling when I was 16, now I’m 23. Started with small jobs in my hometown. It’s a little town in the south of Spain, so it was really difficult for me to start modelling from there. I started to travel, like to Madrid, Milan, and outside the country. Then I moved to Milan, like three years ago; that helped everything. And then the DJ thing, I started also in my hometown, in a little bar playing with my friends. So yeah, everything changed when I moved to Milan, because that’s one of the fashion cities it was much easier. Bigger cities, everything started there.

What was it like growing up in a little town in the south of Spain? Did you feel you could freely express yourself?
I always have done whatever I wanted! [Laughs] But, it was a little bit hard. People, they are not so open-minded. When I was a teenager everyone was like, ‘Who is this girl? This girl is a freak.’ Sometimes I feel like a fashion freak, so maybe it’s normal they think like that. For me, it was kind of hard when I was a teenager, you know? I was like ‘Why are people like that, saying this about me?’ Now, I don’t care. [Laughs] It was hard in that aspect, but I had to move away.

“I always have done whatever I wanted.” 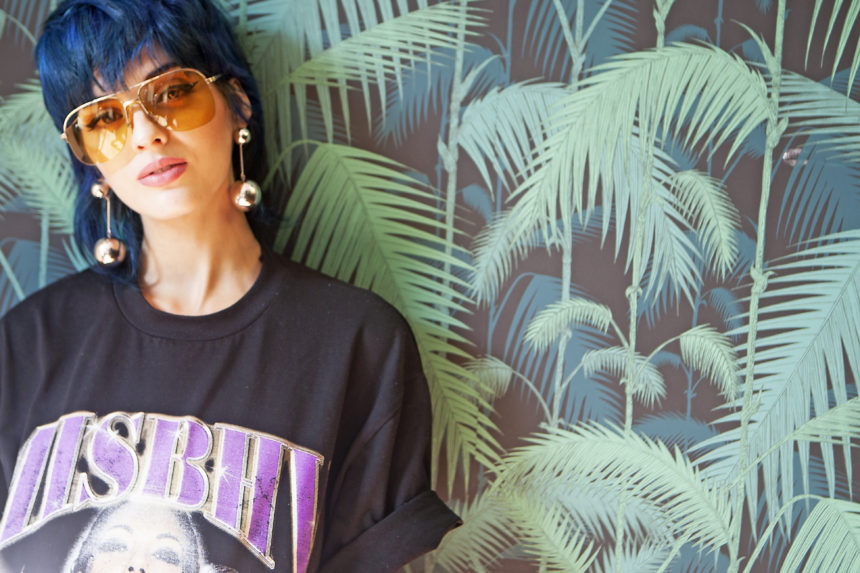 Did you find community on the internet?
Yeah, the internet helped me and it was like, I think, one of the most important tools that I used to get noticed, and I still use it. How I started modelling was because I started taking pictures of myself at home. Like taking crazy clothes that my mom had in her wardrobe. I was uploading that to Tumblr, like before Instagram. It started like that.

What does a normal day in your life look like?
Well [Laughs] it depends. Right now, I’m really chill. I just came from Paris Fashion Week, but I’m actually on tour right now so I’m playing only on the weekends, so through the week I’m pretty chill. But it depends, if it’s fashion week I’m stressed. I don’t know, I mean, I wake up, in the morning usually I don’t have that much to do. If I’m shooting or if it’s fashion week then I have to go to some shows, I have to go to work somewhere, but in general in the morning I have to do some emails, or work on the computer, that kind of thing. Then in the night I have to play, so…

What has been the most memorable moment of your career, so far?
I feel like Rihanna’s ‘Bitch Better Have My Money’, one year ago. She wanted me in her video, that was crazy. It was super cool, I’m really happy. She’s amazing.

What goals do you wish to achieve in the future?
I want to continue doing what I’m doing, of course. In music, I would like to come out with [a new record] next year and for the fashion part, I would like, I mean in the future-future, to work as a creative director. I love fashion. Fashion and music.

How would you describe your personal style?
That’s a difficult question for me. I think it’s something that changes a lot, because I don’t focus on … you know, people get inspired by like one trend or like one period in history, but me, I’m more like, I pick different stuff from different periods. It depends also how I feel everyday. One day I could be wearing crazy colors and then another day I’m wearing all black, it’s something really spontaneous. 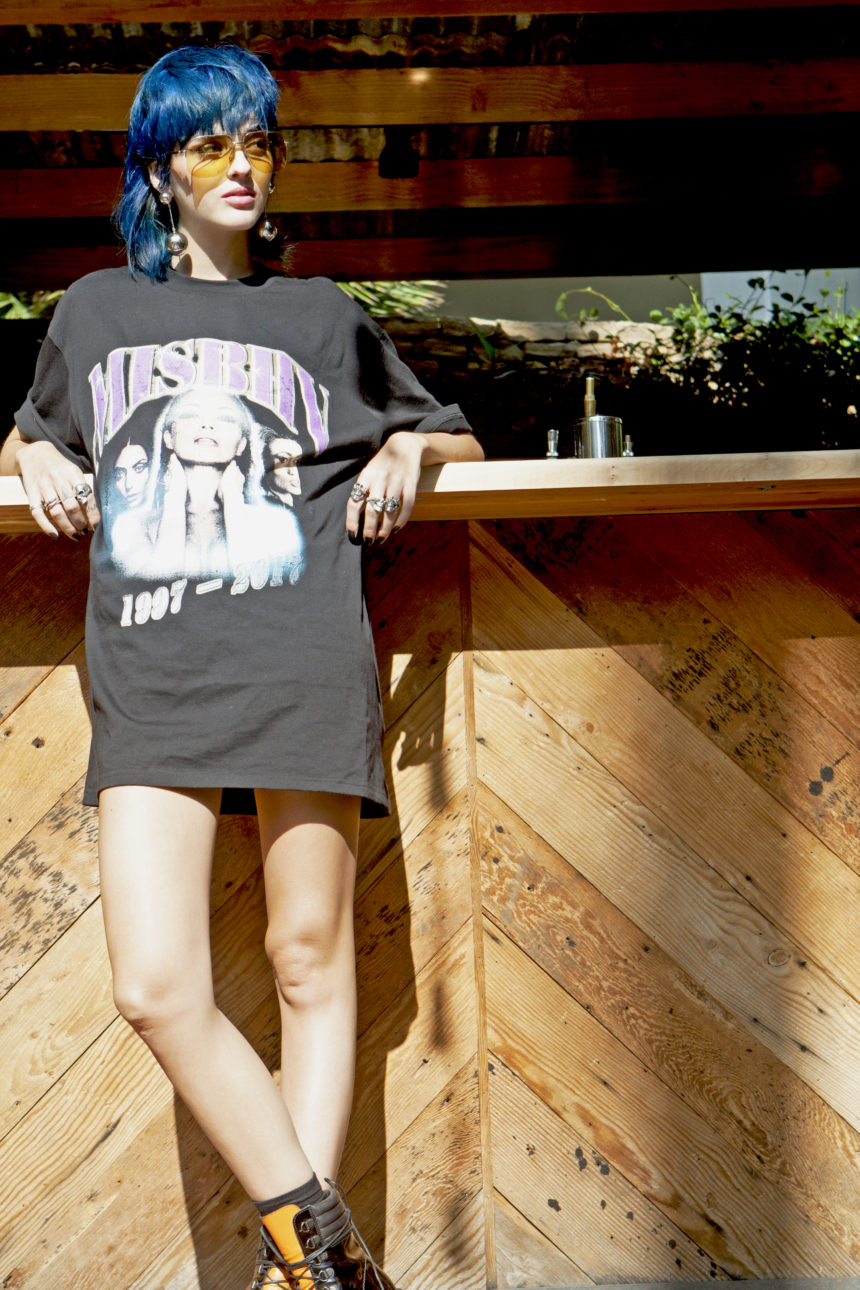 What sounds or scents inspire you?
Industrial sounds, I love like those dark sounds. Like when you go to, how do you say it? I don’t know how to say it in English. Fábrica? Let me look. [Uses Google to translate] Factory! So when you go to a factory, all those sounds you hear, like metal. And then the smells… I think everything. I hate bad smells. I like flowers, I love fresh air. I love to go to the forest.

What is your most prized possession?
I feel like it’s not something physical. I’m fortunate to live and have a family, friends, to do what I am really passionate about, so I think that’s like, the best thing I can ask for.

What activities or daily rituals help get you through the week?
Sleep. [Laughs] Sleep when I can! Yeah, and be with my friends.

What music are you excited about right now?
Techno. That’s what I play. I would love to come out with new music next year.

You just walked in Rihanna’s Spring 2017 Fenty x Puma fashion show… what did you think of the collection?
I loved it! The location, the show itself was amazing. And then the collection, when I arrived I was like, ‘Wow! This is so different!’ The other season was all styled in black and white and I was really impressed, because it was all pastels. I really loved it, I loved the palette that she used for the clothes and the shoes, so amazing. I loved it, and I think she did a really great job.

And you have your own line of merch that you design?
Yeah, I designed a tour t-shirt with my face. I got really inspired by like Marilyn Manson, because I love him. For the font I got inspired by Slayer. And then I designed also a mini capsule collection that came out in September at New York Fashion Week and it’s a collaboration with a Polish brand called MISBHV. [The collection] is called Pain, it’s inspired by like motorcycle girl gangs from Japan. I got inspired by my trip to Japan last year, I was there for like two and a half months. I use pain because it was a really hard time for me, but at the same time it was really good and I met a lot of people who are really great and funny and everything. For me, pain can have two meanings, you know? One can be good, or it can be really bad. I thought it represented in a word my experience over there.

You’ve got a lot of friends in creative places. What’s one thing you’ve learned about the business of fashion from Jeremy Scott?
I think he has been doing his thing forever. That’s something that I really admire. Fashion right now, I see brands changing all the time, every season changing to another completely different thing that doesn’t have anything to do with the last season. I think he has been constant in his thing and true to himself, so I really admire that. I admire all the colors; the pop art inspiration is so amazing to me. He’s great.