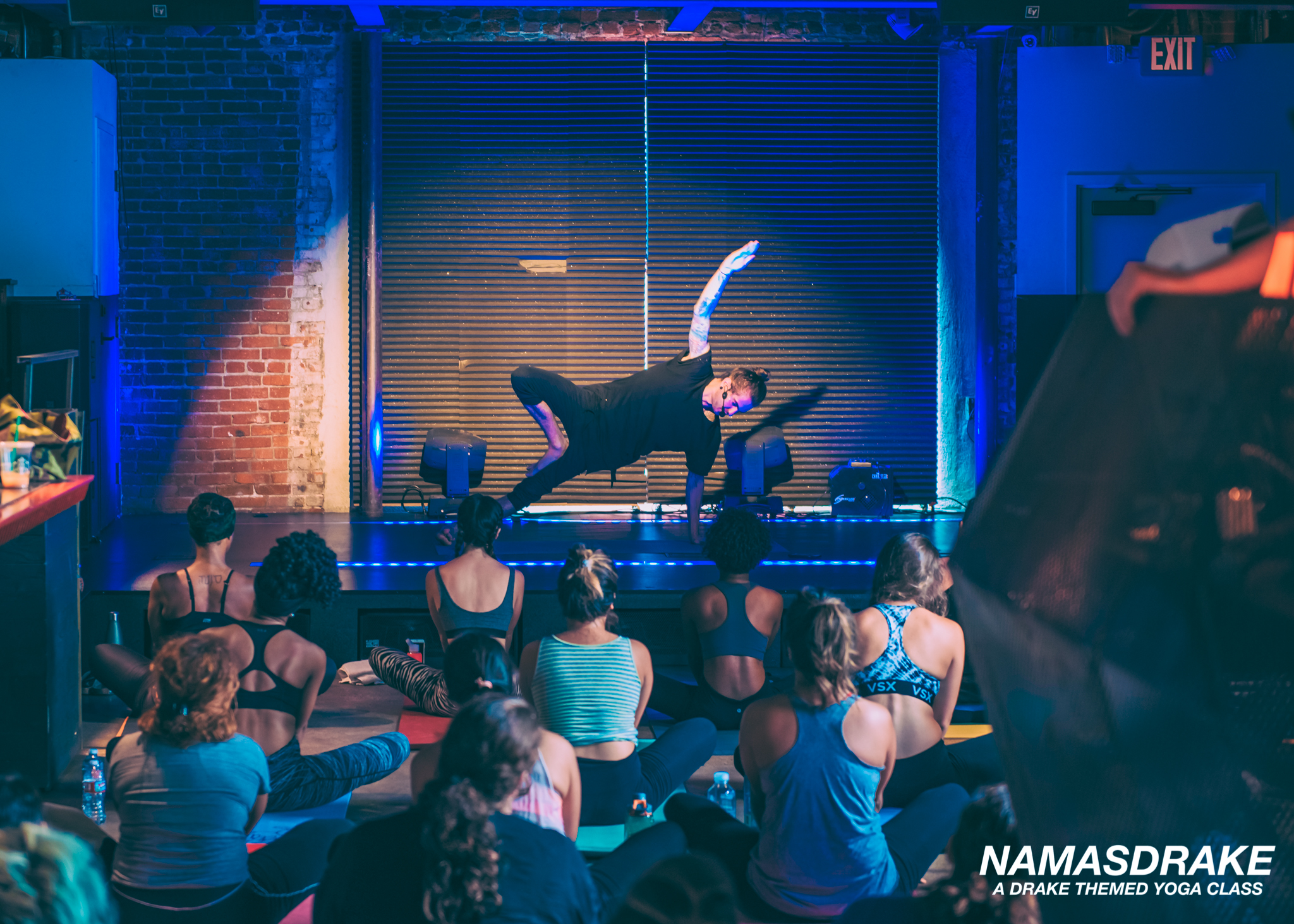 The evening started with a set of Angelenos, spread out on mats, flowing through a 90-minute yoga practice. It ended with a rap trio screaming about “Hair Jesus.”

It’s unlikely that Swami Vivekananda, the Hindu monk often credited as introducing yoga to the West at the turn of the 20th century, would have imagined–or possibly even recognized–the practice as it was on the rooftop of Row DTLA, basking in the sunset and overlooking the city’s downtown skyline, that evening. But across Los Angeles, yoga instructors are bringing the ancient, spiritual tradition into spaces normally reserved for nightlife.

“As much as it is a serious and challenging yoga class,” says Paul Schneider, the instructor of and brainchild behind Namasdrake, the Vinyasa yoga practice soundtracked by the Canadian rapper, “we want it to feel like a party.”

“As much as it is a serious and challenging yoga class, we want it to feel like a party.” 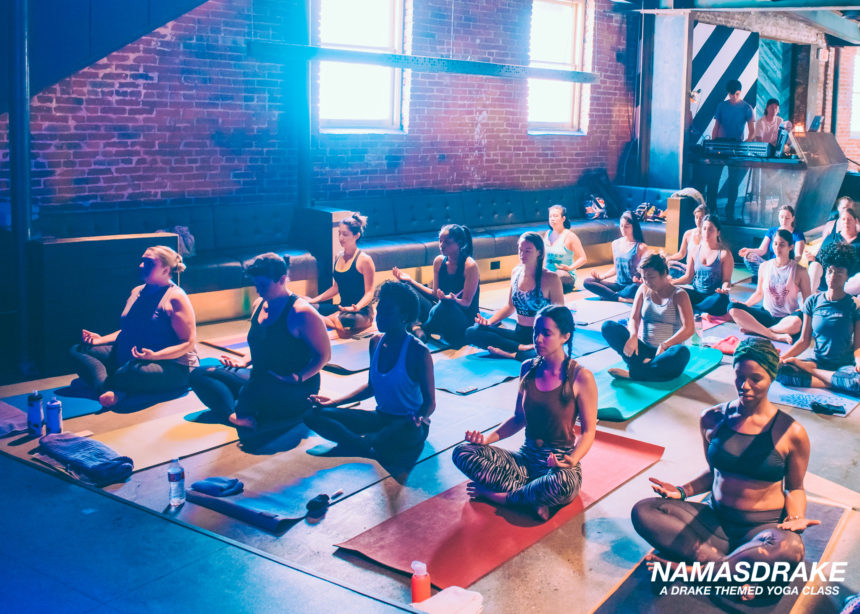 Namasdrake (and its sibling, NamasYe, devoted to Kanye West’s music) is one of several non-traditional practices in town that combine the meditative joys of yoga with the social aspects that might be found in bars or nightclubs. Just down the road from The Hollywood Roosevelt, Sound Nightclub has hosted Deep House Yoga events, while local indie music fave Bootleg Theater is home to Punk Rock Yoga (and its Sunday midday companion, Hangover Yoga), taught by punk guitarist Taleen Kali. And then there’s Bender, the organization which plans events on its own at hot spots like Sound and the rooftop of the Standard in downtown, while also collaborating occasionally with the like-minded (the Row DTLA class-and-concert was in conjunction with Sofar Sounds, the group that organizes secret, pop-up concerts in living rooms and public spaces around the world).

The sessions themselves can be rigorous. Bender’s rooftop class involved inversion work and balance poses beyond the reach of a beginner (though always with modifications), while Schneider shoots for a class that beginners can survive, but still challenges the advanced.

Schneider certainly recognizes that putting Drake’s name on the event will bring in some less-than-experienced yogis. “I think there’s still a weird stigma around yoga, like people think it’s some sort of ‘new age’ thing,” he says. “But if you bring in a part of contemporary culture, it maybe lightens the mood a little bit and people are less nervous about trying something new.”

“The evening started with a set of Angelinos, spread out on mats, flowing through a 90-minute yoga practice. It ended with a rap trio screaming about ‘Hair Jesus.'” 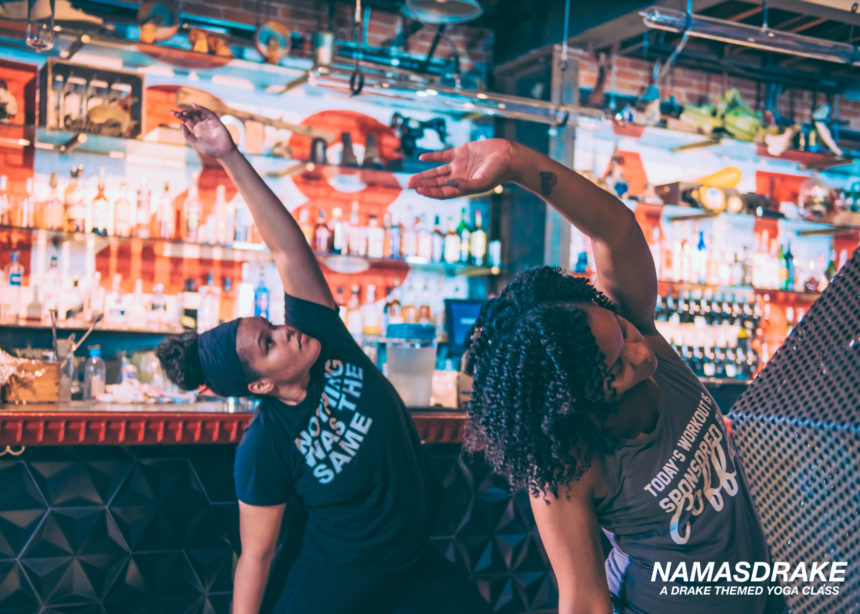 Like Kali at Punk Rock Yoga, Schneider started his personal practice to help overcome injuries: First, a back problem started from spending too much time hunched over his guitar, and then an ankle one that ruled out most high-impact workouts. He eventually loved yoga enough to go through teacher training, where the idea to combine it with Drake first came about.

“We started talking about the sixth chakra, and at that time Drake’s album ‘Views’ was being called ‘Views from the 6,’” he says. “And it just popped into my head.”

For practitioners, whether they are nursing injuries, are long-time yogis or just want to try yoga for the first time in an unintimidating environment, the addition of zeitgeist-friendly elements make a night out of being on the mat. And after a drink at The Roosevelt’s Public Kitchen & Bar or Library Bar, it’s a night you could surely only experience in Hollywood.