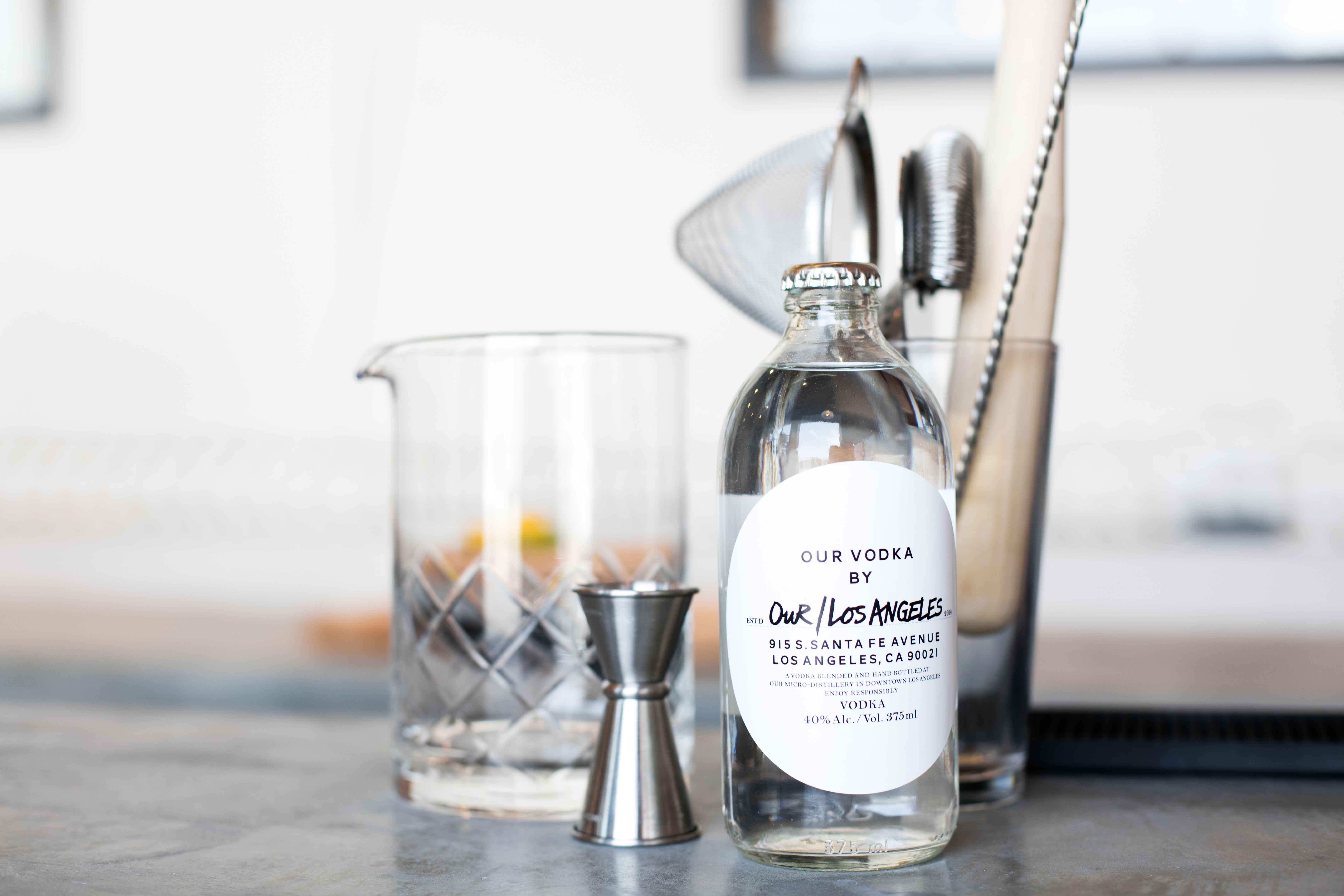 In stark contrast to the glitz of the Hollywood Roosevelt, Greenbar Craft Distillery is hidden down a dead-end side street in the often-overlooked pocket of downtown Los Angeles. If Traction Avenue is the center of the Arts District, then this cul-de-sac of 8th Street is the where the artists learn their craft, all warehouses and graffiti.

On the inside, though, raised ceilings and an industrial feel give it a warmth, and its upstairs tasting area would be the perfect setting to grab a cocktail, learn about a locally-created spirit, and watch the process unfold on the distillery floor below.

“We’re not even allowed to put peanuts out,” Greenbar co-founder Litty Mathew says.

It’s been more than three years since California finally loosened the rules surrounding distilleries to allow on-site tastings and tours. And it’s been a little more than a year since the creation of a craft distillery license, which allows smaller outfits to operate on-site restaurants and bars. But while that’s given downtown Los Angeles’ distilleries a chance to at least open their doors – and they have – there’s still more to do legally before the city’s spirits scene is as lively as its breweries and wineries.

“Do we want to stay small or do we want to be available all over?” asks Greenbar co-founder Litty Mathew. 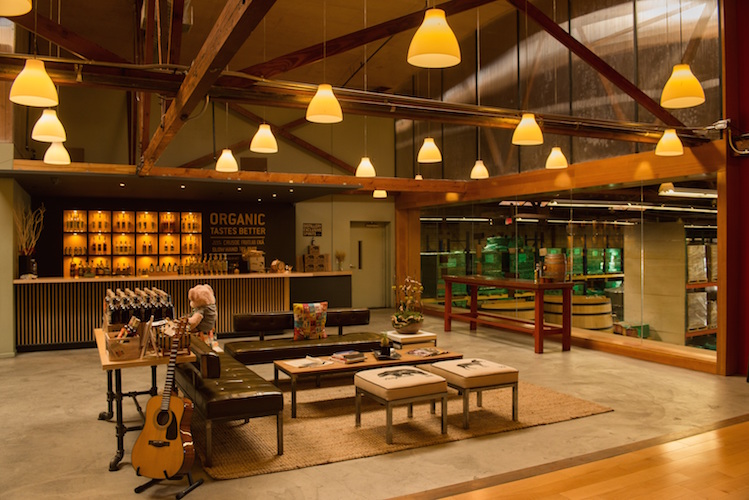 There are two important recent laws to take into account when looking at Los Angeles’ distilleries. The first, AB 933, passed in 2013 and allowed spirit makers to finally conduct tastings on the distillery grounds and sell their product directly to customers.

Greenbar moved to the Arts District in 2012, and started offering paid tours in October of 2015. In December of 2016, the distillery ushered 1,000 guests through its doors.

“For Melkon [co-founder and husband Khosrovian] and me, it’s always been about introducing people one-on-one to the product,” Mathew says. “We can’t afford billboards or anything like that. What’s fun is that, when you have people come in, you still have that feel. And we love people coming in and having a connection with the brand here.”

The second law, AB 1295, gives “craft” distillers (groups making less than 100,000 gallons of spirit in a year) the additional ability to operate an on-site bar or restaurant, much like a microbrewery may have a brew pub. While it’s a step towards giving distilleries the same rights as their beer and wine siblings, it creates a tough choice for a growing spirit maker. Greenbar, for instance, has several different products; it may be best known for Tru vodka and gin, but it also makes a whiskey, a tequila (off premises, in Mexico), and several different liqueurs. Keeping the total gallons produced under 100,000 would severely hamper its expansion efforts.

“Our thoughts are: Do we want to stay small, or do we want to be available all over?” Mathew says.

Just down the road, the latest distillery to open is Our/LA, a local branch of the international vodka brand Our. Combining local ingredients with a base spirit, the distillers have opened branches in Berlin, Detroit, Amsterdam, and London. Los Angeles is the only home base without the ability to serve the vodka in cocktails (or more than one pour, for that matter); thanks to the state’s rules, the production of the entire Our brand, across all cities, count against the 100,000-gallon limit.

“Even if we can get people in here, we can only serve 1.5 ounces per day,” Samantha Hochhauser, Distillery Manager of Our/LA, says. “And we can’t serve other alcohols. … We’ve struggled a little bit in getting people in the building, but that’s not really our focus right now.”

The latest distillery to open is Our/LA, a local branch of the international vodka brand Our. 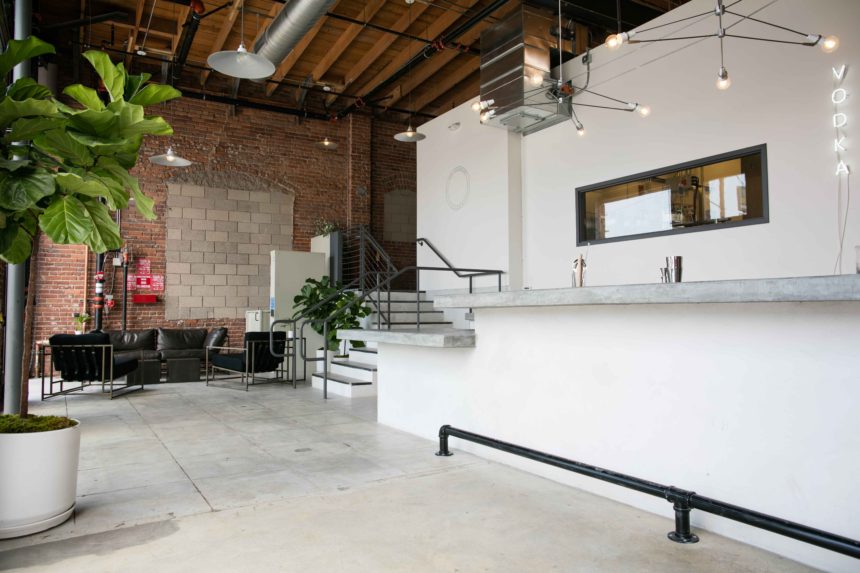 Like Greenbar and other area distilleries like The Spirit Guild, Our/LA does offer tours, though as a recent start-up those jaunts are currently available by appointment only. As a sign of optimism, though, Our/LA’s industrial, brick-walled space does prominently feature a bar space.

“Eventually, we want to use the distillery to get people in, having events and more going on,” says Lettie Younger, Our/LA’s marketing director. “But right now, we’re just focusing on letting people know who we are.”