A stroll through Hollywood’s Golden Age 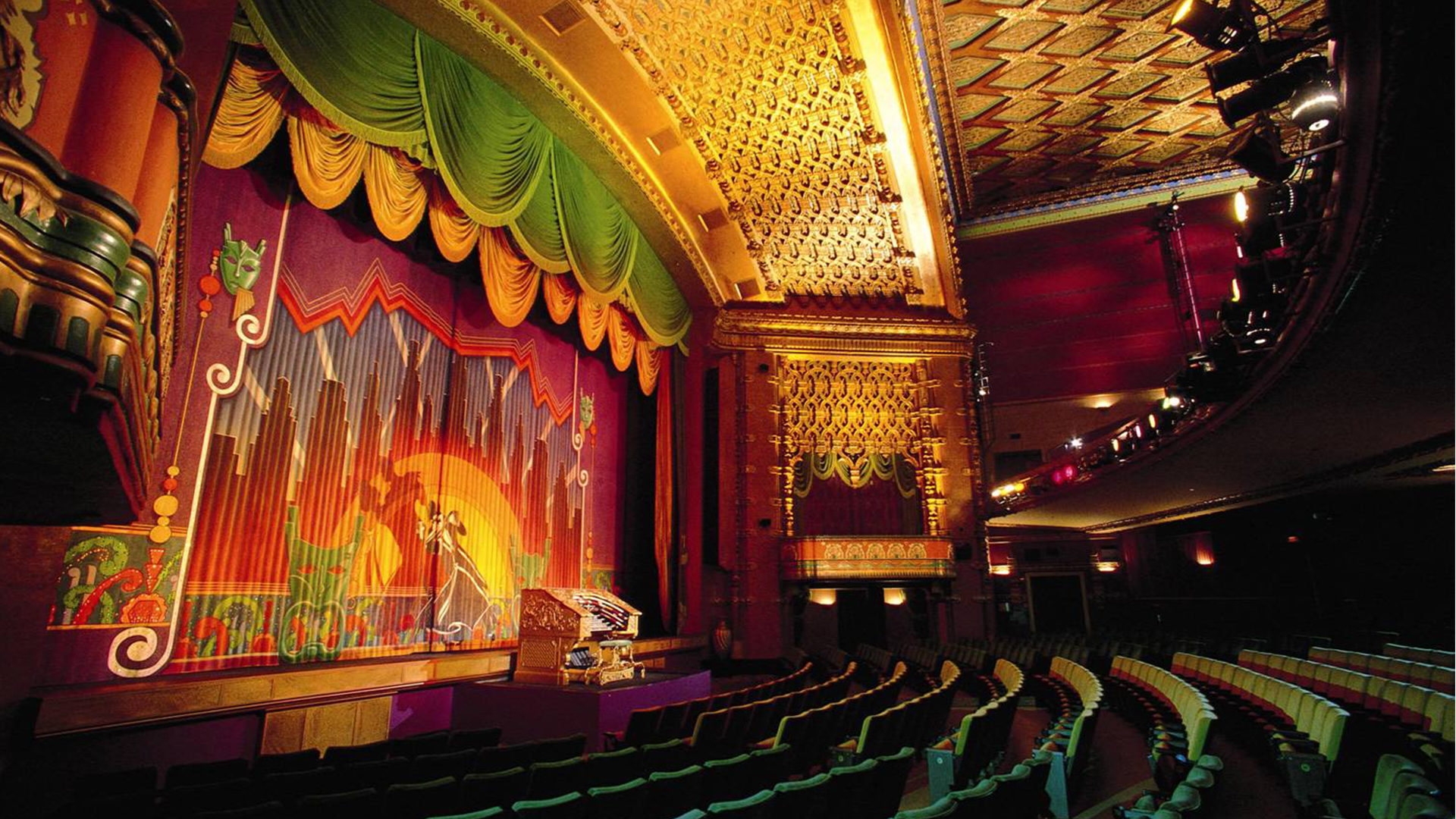 It’s said that the road to Hollywood is paved with broken dreams. That may be true for the many trying to break into the business, but for those just passing through?

The road in Hollywood (and, by that, we mean Hollywood Boulevard itself, of course) is full of places to eat, drink, and celebrate some of what remains of the industry’s golden age. In fact, even a simple jaunt between the Hollywood Roosevelt Hotel (also known as the home of the first-ever Academy Awards ceremony) and the Hollywood Pantages Theatre, which is just past the landmark intersection of Hollywood Boulevard and Vine Street, can provide ample opportunities for sight-seeing. 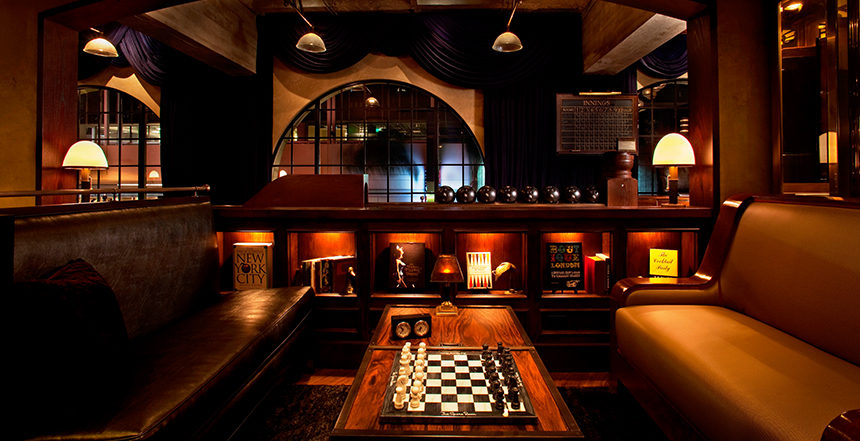 Even if you’re not staying at this storied hotel (and, therefore, granted the privilege to hang out by its David Hockney pool), head through the famed Spanish-style lobby to the bar area. The speakeasy-style Spare Room is the place for an Old Fashioned or Tom Collins to go with a game of backgammon or even bowling. But no one will judge if you go for something more creative (if you’re with a group, try the Rock Lobster punch bowl: Ketel One vodka, spiced hibiscus, coconut water, Amontillado sherry, and pineapple and lime juices). Or, find glamour in other in-house establishments like the Library Bar, which comes fully stocked with libations and fresh produce that just dares you not to ask the bartender to create your new signature drink, and bone-in ribeyes and moules-frites at the hotel’s brasserie, Public Kitchen & Bar. The hotel has long been a go-to for Hollywood elite; it has a suite named for Marilyn Monroe, which includes a wrap-around balcony that overlooks the pool, and it also frequently hosts premiere parties in its lobby. 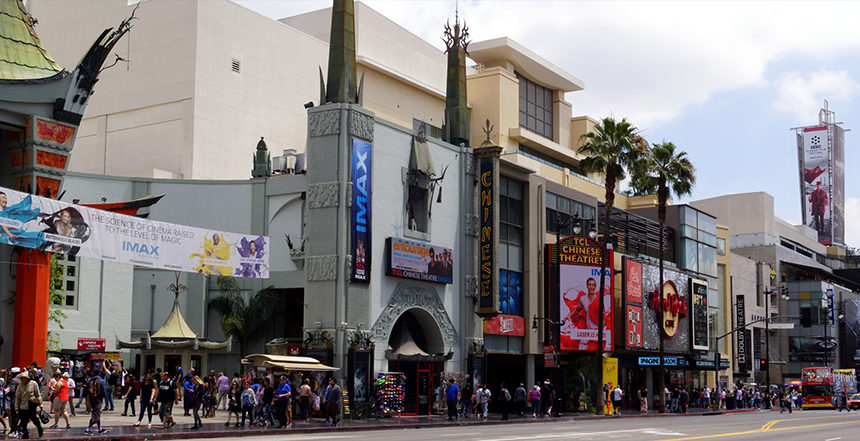 For over 90 years, master showman and reputedly larger-than-life personality Sid Grauman’s theater has gone through many naming variations but has remained the epicenter for Hollywood premieres and screenings. When it’s not hosting red-carpet openings, it serves its purpose as a state-of-the-art movie house for first-run movies. But its star attraction is still the cement sidewalk in front of its entryway. That’s where tourists flock like Cinderella’s sisters to see if their shoes and palms fit inside prints of Mel Brooks or George Clooney’s feet or hands (or, in Betty Grable’s case, her legs). 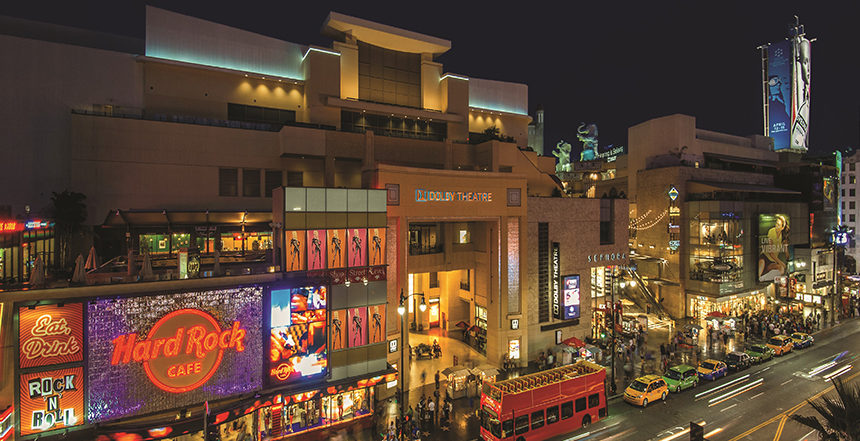 This outdoor shopping center is more than a chance to grab a quick lunch at California Pizza Kitchen before popping into Sephora or Lucky Brand Jeans. It also respects its heritage with some subtle (and not-so subtle) nods to Hollywood’s gilded age. It’s the home of the Dolby Theatre, the current location of the Oscars ceremony, and its design also allows for decent views of the Hollywood sign in the hills. And then there are the elephants. If you look up at the entrance near Hollywood Boulevard, you’ll see these giant, sitting statues are waiting to greet you. And you should know that they’re inspired by the Babylon set in D.W. Griffith’s film, Intolerance. Apparently, this was all Ray Bradbury’s idea. 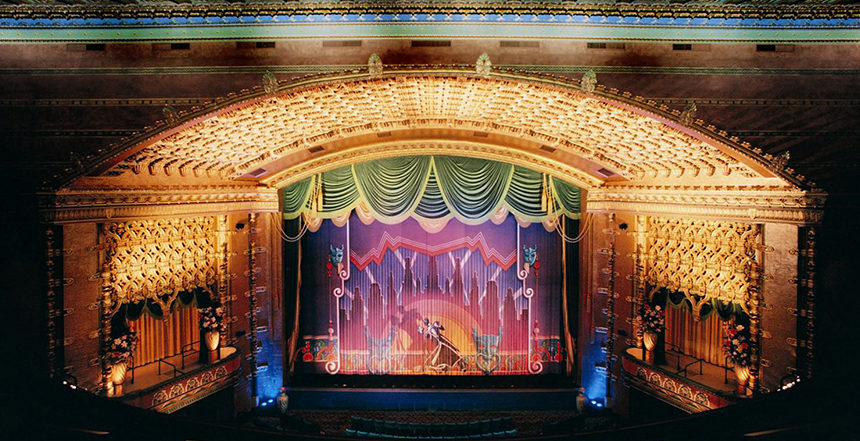 Another fully restored old Hollywood palace, the El Capitan originally opened in 1926 and was dubbed “Hollywood’s First Home of Spoken Drama” because it hosted performances by the likes of Rita Hayworth and Buster Keaton. After falling into disrepair, it’s now operated by a subsidiary of Disney and is the place to see those films (how many other family-friendly matinees also include a performance on a Wurlitzer theatre organ and a song and dance routine?). The front entrance also has a Ghirardelli Soda Fountain & Chocolate Shop and the Disney Studio Store Hollywood. 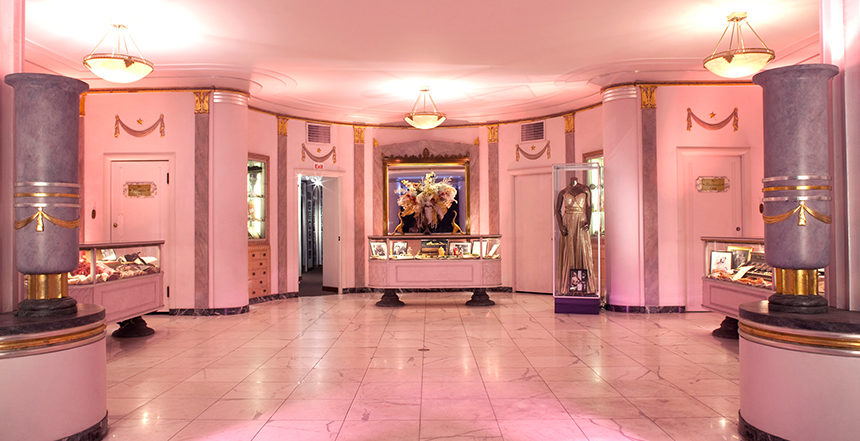 Could there be any place more perfect to celebrate the old Hollywood glamour than a museum housed in the former workspace of the man who helped establish it? The former headquarters for “make up king” Max Factor – i.e. the guy who made the idea of women wearing makeup commonplace and whose studio made Lucille Ball a redhead and Monroe a blonde – is now known as the “official museum of Hollywood.” Showcasing the Golden Era along with more than 100 years of Hollywood history through more than 10,000 exhibits and displays, recent exhibits have included “Jean Harlow: Hollywood’s First Blond Bombshell” and tributes to the industry’s LGBTQ community. 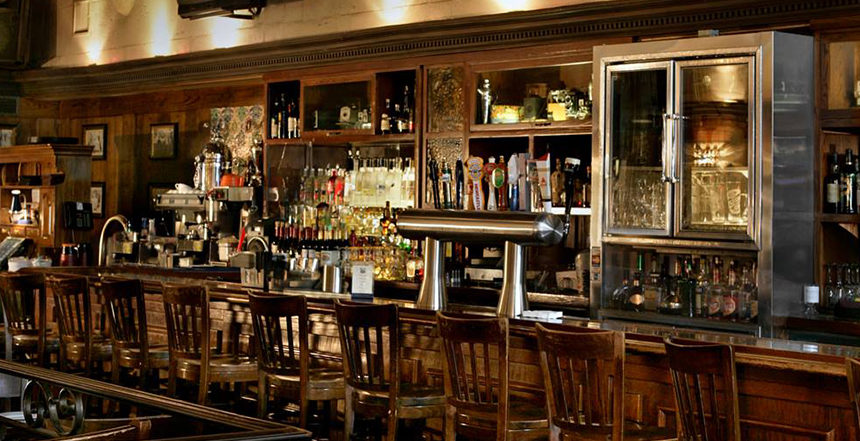 Before movie theaters thought to placate us with bottomless buckets of popcorn and bladder-bursting cups of soda, there was the Pig ‘N Whistle. Originally part of a chain of restaurant and candy shops that grew out of downtown Los Angeles’ theater district, this pub opened in 1927 (its name is derived from the Old English words “piggin,” as in a lead mug, and “wassail,” or a hot mulled cider). It then became the de-facto concession stand for cinephiles grabbing a bite before a screening at the nearby Egyptian and a meeting place for the likes of Spencer Tracy or Shirley Temple to hold court. After a grand remodel in the ‘90s, the Pig ‘N Whistle is now a fun spot to get a pizza and a pint with your nostalgia. 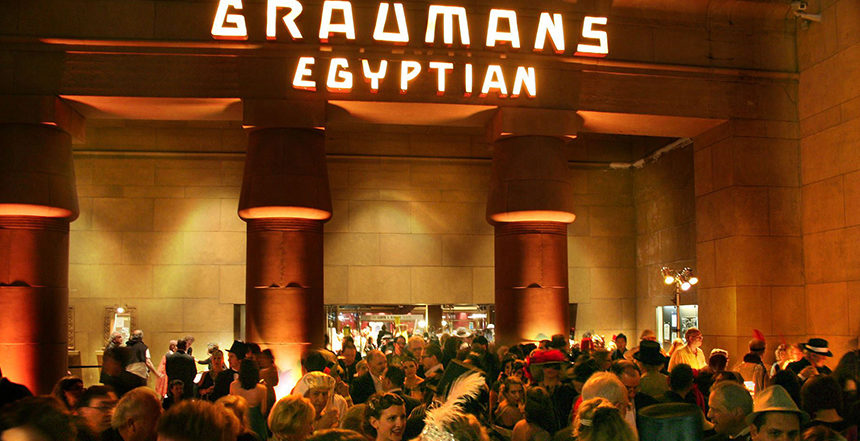 The location, which is credited for the first-ever movie premiere and is another endeavor from the infamous Grauman, opened in 1922 with the opening-night screening of Robin Hood starring Douglas Fairbanks (with Mary Pickford and Charlie Chaplin in attendance). Today it is owned by nonprofit American Cinematheque, which uses the space to showcase classic films and “classic films” (a recent double feature celebrated Don’t Tell Mom the Babysitter’s Dead and Adventures in Babysitting), oftentimes with the filmmakers themselves watching in person. Historic tours of the theater’s dressing rooms, projection booth, and more are also available. 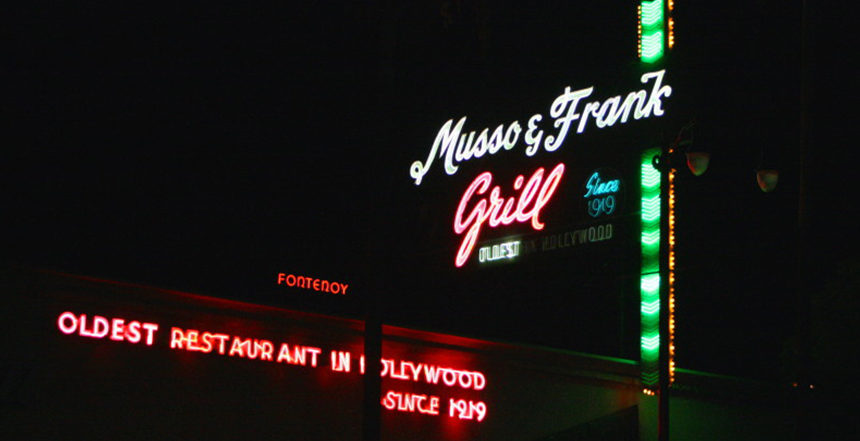 Buttoned-up waiters who seem like they’ve been there since the dawn of time, bubbling and cheesy French onion soup, and the perfect piece of steak served with an extra dry martini? It’s no wonder this place’s cozy booths have seen their share of Hollywood insiders in its almost 100 years of existence. But it isn’t just a hangout for starlets and movie moguls. This establishment was known for being the meeting place for literati legends like F. Scott Fitzgerald, Raymond Chandler, William Faulkner, and Dorothy Parker. 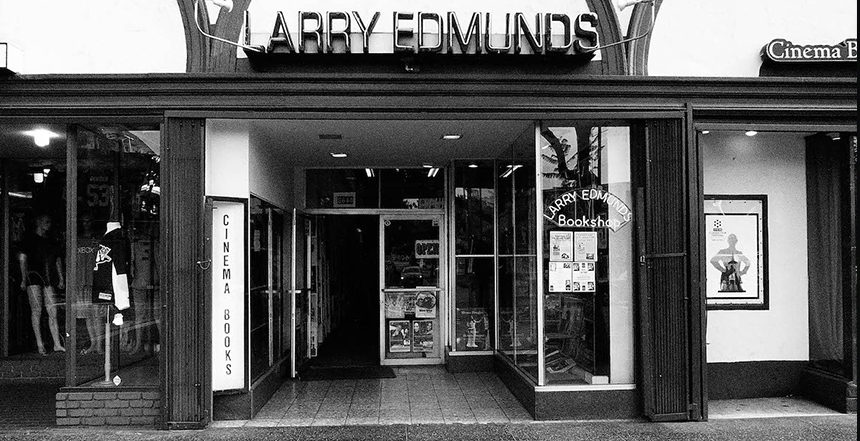 This Hollywood Boulevard mainstay has been selling screen siren memorabilia and artifacts since the industry’s golden age was actually happening (it opened in 1938). It’s still the place to kill an hour (or ten) perusing the overstuffed shelves of books and collections of movie posters and photos for surprise treasures. 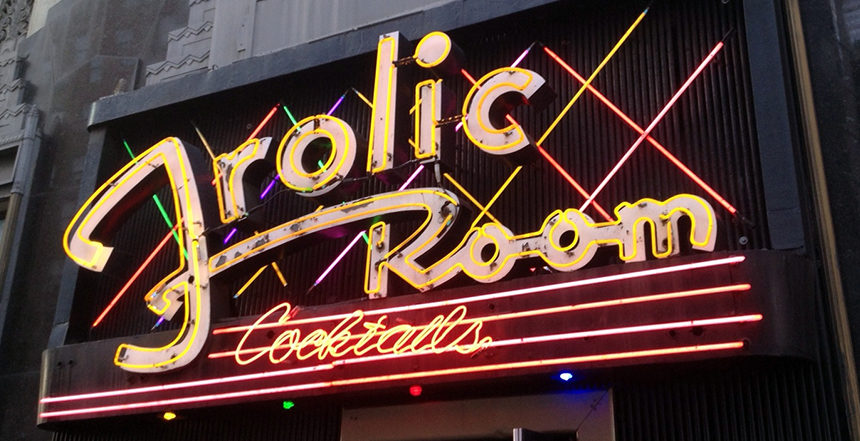 If a movie’s production designer were to create a dive bar, this narrow neon-lit nightspot next to the Pantages would no doubt be the model. Starting out as a speakeasy and open to the public since the ‘30s, the Frolic Room is seedy in the most comforting definition of the word (think more hipster vintage than 1970s Times Square). Everyone from Judy Garland to poet Charles Bukowski had been known to drink there (the latter’s portrait has been seen above the cash register). And now, so should you. 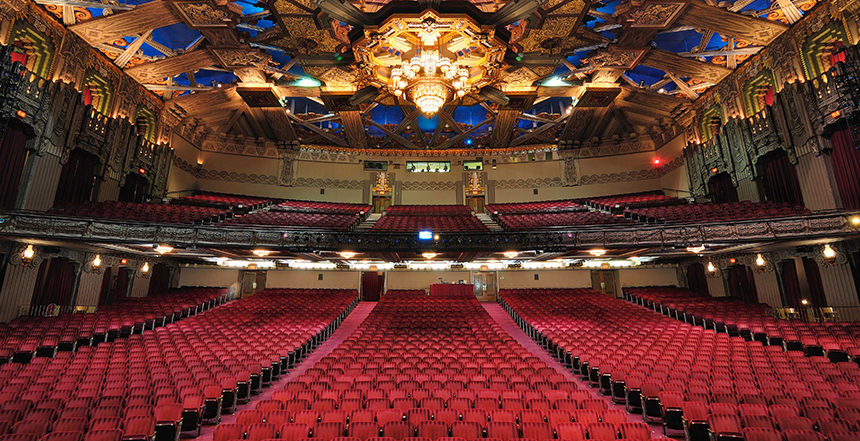 Another renovated movie palace and also another previous home of the Oscars, the Pantages is now Hollywood’s go-to spot for touring Broadway musicals (it’s currently home to the Los Angeles production of Hamilton, which is in residence through December 30). Having opened during the Great Depression, it’s also a recipient of the Preservation Award from the Los Angeles Conservancy historical society. If you can’t make a show, don’t be surprised if you end up seeing the Art Deco building and its interiors on screen. It has been the filming location for several movies and TV shows, from 1980 film The Jazz Singer to Michael Jackson’s 1995 video “You Are Not Alone.” 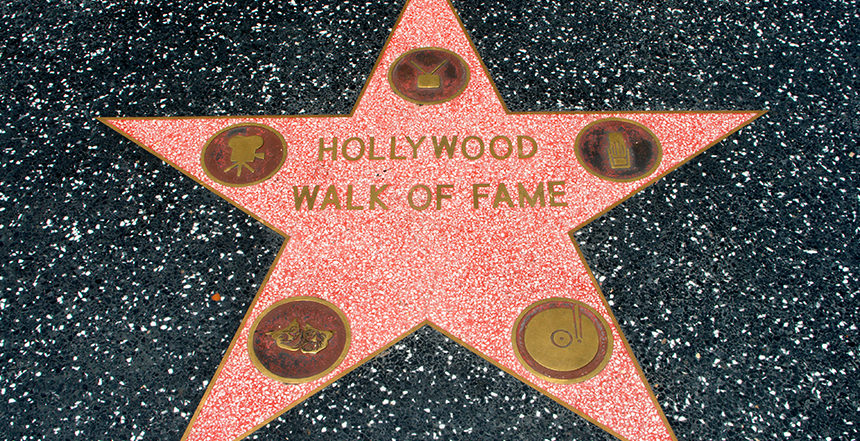 + Credit: Marlene Panoyan, courtesy of the Hollywood Chamber of Commerce

If this list of items doesn’t satiate your fix for Hollywood nostalgia, look down. The pink-and-metallic stars on the infamous Hollywood Walk of Fame line the sidewalk through the area as well as down Vine Street and include influential names like King of Pop Michael Jackson (whose star is near the Chinese) and actress Nicole Kidman (hers is near the Dolby Theatre). Grab a snack from one of the area’s many restaurants—perhaps, a dessert from New York import Shake Shack, a block east of the Pantages—and practice your sidewalk selfie skills with the names of A-listers of yesterday and today.