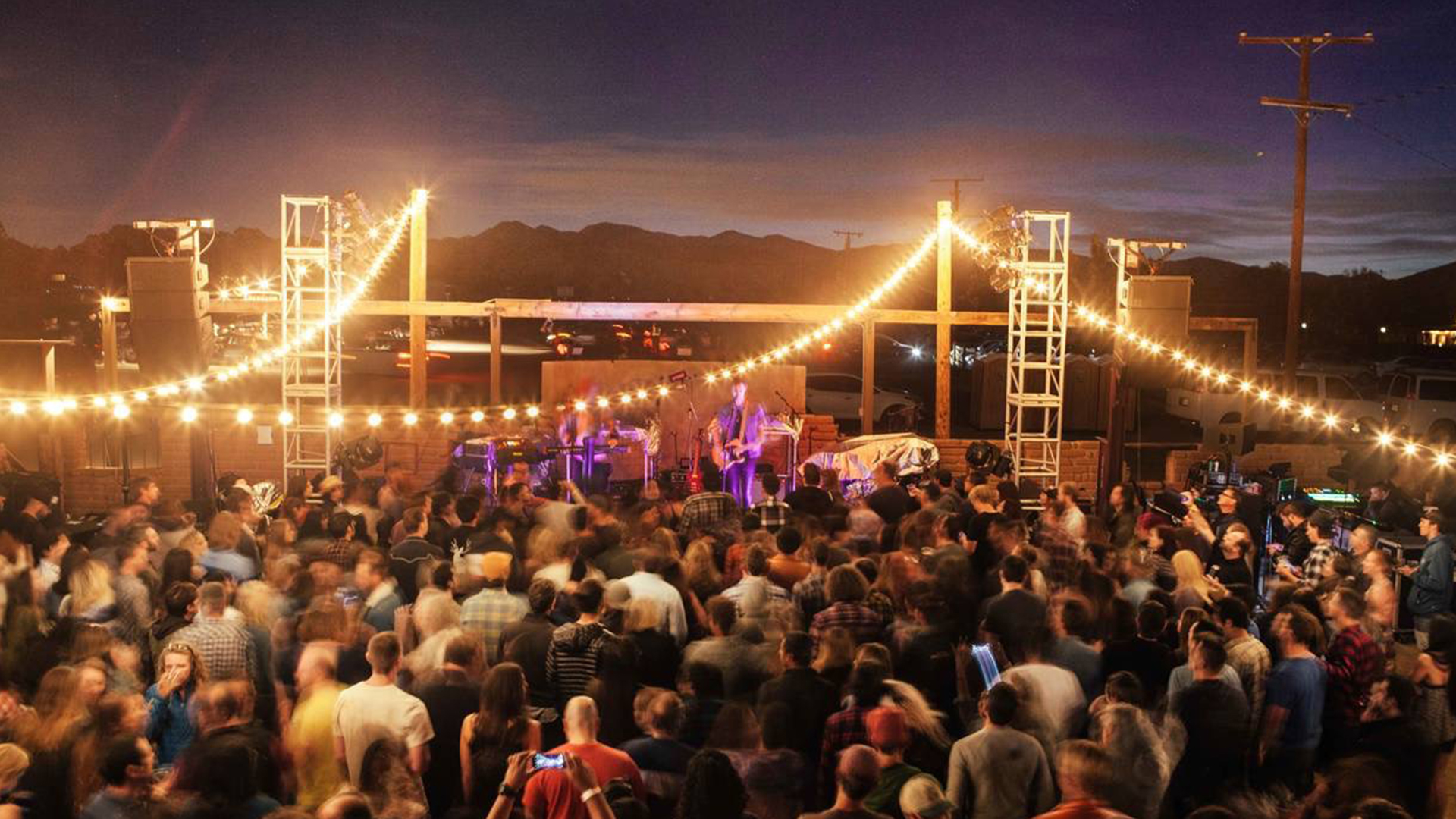 Last year, Paul McCartney played Fenway Park. He played Olympic Stadium in Munich, the massive MetLife Stadium in New Jersey, and, closest to home, to 75,000 festivalgoers for consecutive weekends in Indio at Desert Trip in October.
He also played for 300 people at a roadhouse in the California High Desert.

“Everything was top secret,” says Robyn Celia, the co-owner of Pappy and Harriet’s Pioneertown Palace—a restaurant, bar, and music venue in Pioneertown—about the one-night-only show. “I couldn’t tell anyone, especially employees. Someone actually said, ‘What’s the big deal, it’s not like a Beatle is going to walk in the room!’ Well…”

Such is the magic of Pappy and Harriet’s, the high desert oasis located a half-hour or so from Two Bunch Palms. It’s a magnet for locals, who love its sense of community and good food and drink. It’s a draw for Joshua Tree campers, looking for occasional refuge from the desert sun. And, despite being hours removed from Los Angeles, it has become a favorite place for Angelenos to see their favorite band perform.

“I couldn't tell anyone, especially employees. Someone actually said, ‘What's the big deal, it's not like a Beatle is going to walk in the room!’ Well...” 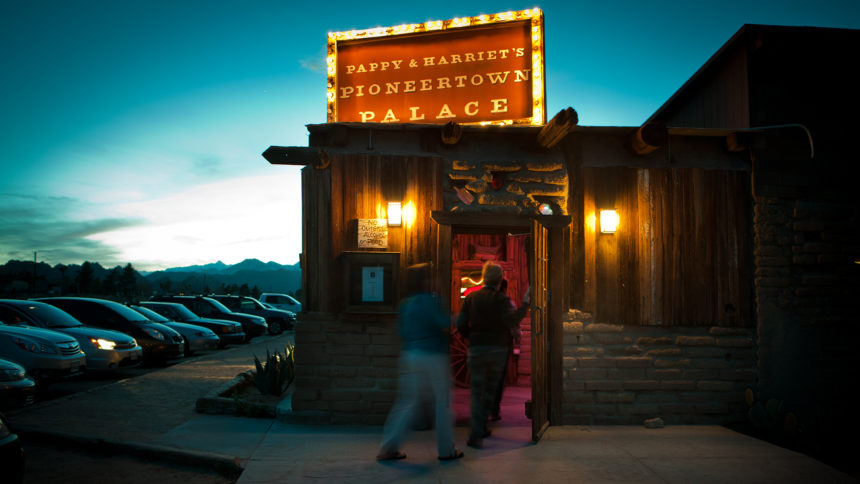 Like so many Hollywood-adjacent stories, Pappy and Harriet’s origin is tied to the film industry. Pioneertown was built as a movie set for westerns, with support from stars like Roy Rogers and Gene Autry. Its early years can be seen in television shows like “Judge Roy Bean” and “The Gene Autry Show.”

It wasn’t until 1982 that Claude Allen, now best known as Pappy, and Harriet Aleba bought the set’s saloon (which had gone through the ‘70s as a functioning cantina) and turned it into the roadhouse that it is today. The namesake Pappy, still memorialized with a bust behind the bar, passed away in 1994. The bar ownership changed hands a few times before landing in the lap of Celia and Linda Krantz, the two New Yorkers who purchased Pappy and Harriet’s in 2003.

“My partner Linda was a prop master in the film business,” Celia says. “She did a movie in the ‘90s that went straight to video in Pioneertown. Harriet was the caterer for the shoot and Linda fell in love with Pappy’s.”

Celia didn’t bring music to the roadhouse; Pappy and Harriet’s had featured mostly country and blues music previously, alongside cover bands. But Celia saw a potential for a different crowd with a wider range of bookings. And the bands fell in love immediately.

“Pappy and Harriet’s has earned a reputation as a go-to spot for bands looking for a unique experience, and fans who would rather see favorites in a laid-back atmosphere.” 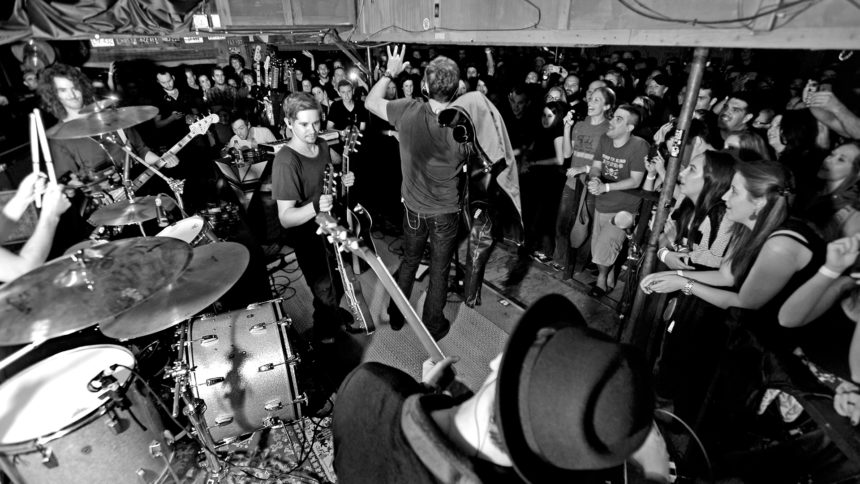 “The first show I booked was Lucinda Williams in 2003,” Celia says. “She played our 10-year anniversary. … I love all kinds of music so my focus was to slowly shake things up. No way I moved my life across the country to hear Toby Keith covers all night.”

Locals still take the stage here; Sunday nights are dedicated to the house band, appropriately titled The Sunday. But Pappy and Harriet’s has earned a reputation as a go-to spot for bands looking for a unique experience, and fans who would rather see favorites in a laid-back atmosphere. There are two stages; the indoor space can accommodate 300 and generally feels like a honkey-tonk, while the outdoor stage in the back is larger and features, perhaps owing to the invisible-in-L.A. stars above, a more relaxed feel. Acts like Future Islands, Mac Demarco, and Lorde have each played there in 2017 alone, and during the week between Coachella weekends, locals are treated to a mini-festival of Pappy nights alone.

All of this comes in a location that feels removed enough to be another planet entirely. But to Celia, that’s likely a feature, not a bug.

“I think the location has actually been an asset,” she says. “Seeing shows out here, you have to be present. Not much cell service!”

*All photos courtesy of Pappy and Harriet’s.