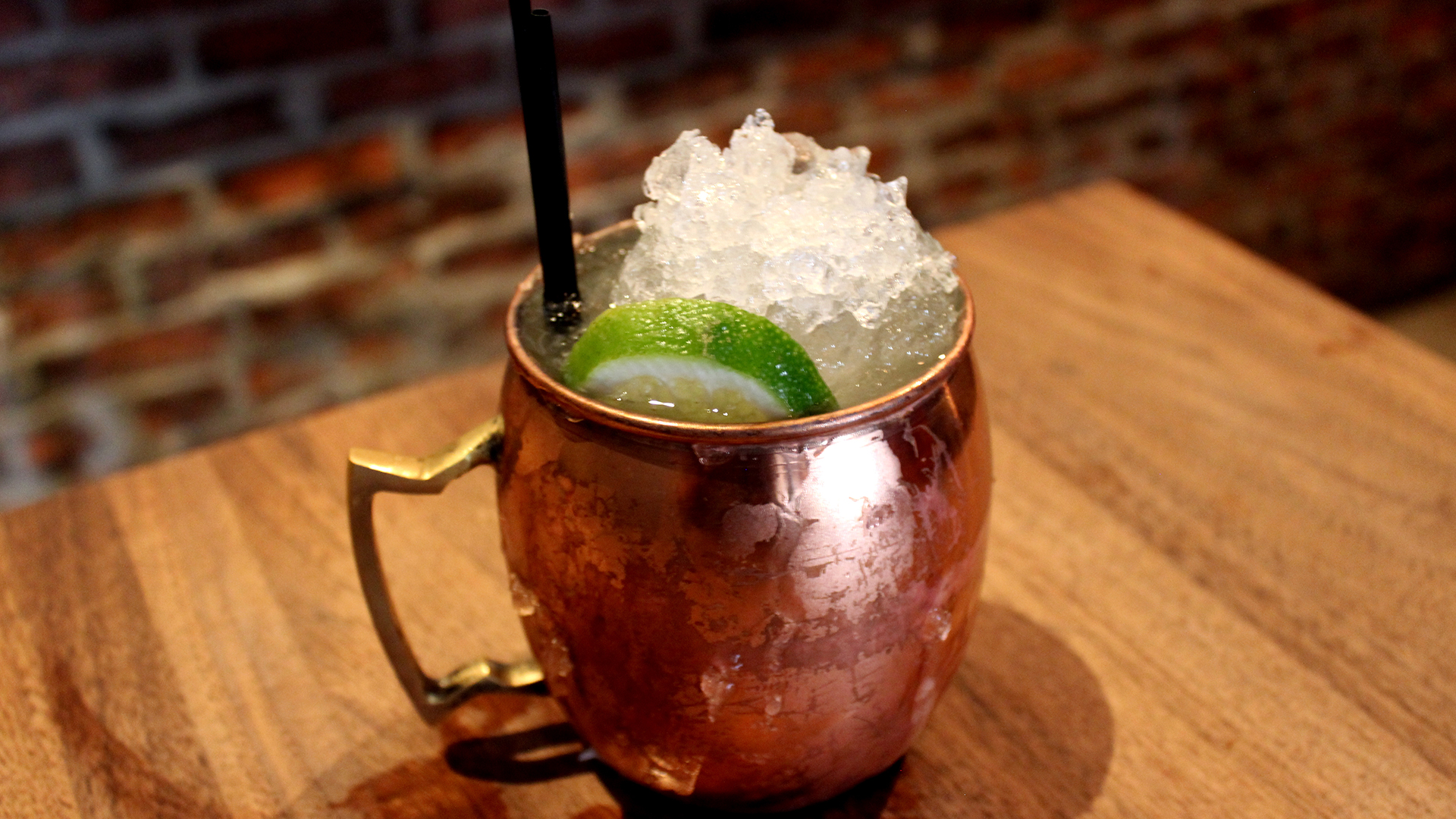 In a city that can be careless with its own history, it’s impressive that a plaque still exists to commemorate the Cock ‘n’ Bull. What once was a popular bar and restaurant, with regulars including stars like Errol Flynn, writers like F. Scott Fitzgerald, and the industry power players that make a town like Hollywood go, is now a Jaguar and Land Rover dealership at the west edge of the Sunset Strip, about 15 minutes from The Hollywood Roosevelt. There, the plaque reads, “Founded During the First Year of His Majesty George VI’s Reign & Situate in the Region of Sunset-Upon-The-Strip,” an appropriately arch epitaph for a commemoration of a bar.

That being said, the caption leaves out the bar’s biggest contribution to drinking culture: It was the place where the Moscow Mule was invented. Born out of leftover vodka and hard-to-sell ginger beer, the Mule—a mainstay on the cocktail menu at The Hollywood Roosevelt’s Public Kitchen & Bar—may be Los Angeles’ most popular non-Tiki addition to the bartender’s canon.

The Mule has competing origin stories. One legend, as it is, starts in 1941, when Smirnoff owner John Martin sat down with Cock ‘n’ Bull owner Jack Morgan; the former was trying to sell vodka to a whiskey-loving United States, while the latter was trying to move cases of house-branded ginger beer. The other comes from a Cock ‘n’ Bull bartender, Wes Price, who has said that he invented the drink in an attempt to clear out the Cock ‘n’ Bull’s basement.

“The caption leaves out the bar’s biggest contribution to drinking culture: It was the place where the Moscow Mule was invented.” 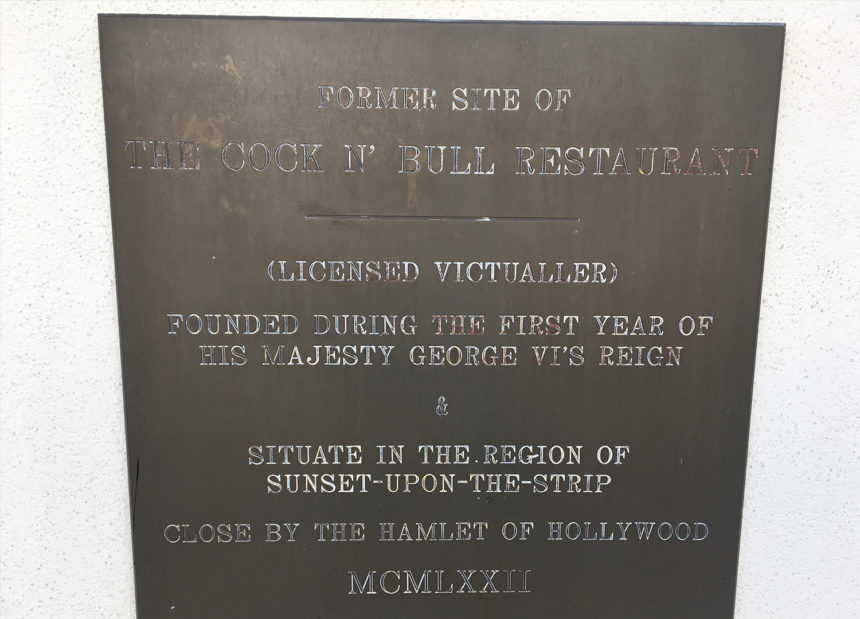 “It’s always very hard to say with these things,” says David Wondrich, a cocktail expert and author of “Imbibe!” and “Punch: The Delights (and Dangers) of the Floating Bowl.” “You look at the evidence: The bartender claims he was there and mixed it. Did he mix it at the direction of the owners? I don’t know. The owners often didn’t get behind the bar; they’d tell the bartender ‘make me this.’ So it could very well be both.”

The drink’s identity was forged in those early years, with the star-studded Cock ‘n’ Bull clientele giving the Mule a glitzy veneer (the first Mule, Price has said, was poured for actor Broderick Crawford). As it spread, it was an integral part of selling vodka to a whiskey-crazed cocktailing public.

“The Moscow Mule, along with the Bloody Mary, launched vodka,” Wondrich says. “They made it the fastest-growing spirit ever in America.”

After falling out of favor in the 1970s (a time period sometimes referred to as the “dark ages” of cocktails), the Mule returned with a vengeance when the cocktail became en vogue again. It’s an interesting choice for a rebirth, especially compared to the complex, multi-layered drinks that mixologists are now known for; with just three ingredients, it’s a drink that’s hard to screw up.

“It’s an entry-level cocktail,” says Richard Foss, the California Curator of the Museum of the American Cocktail. “And a lot of people have a certain nostalgia about the first drink that they really enjoyed, and they’ll keep on ordering it.”

“The Moscow Mule, along with the Bloody Mary, launched vodka. They made it the fastest-growing spirit ever in America.” 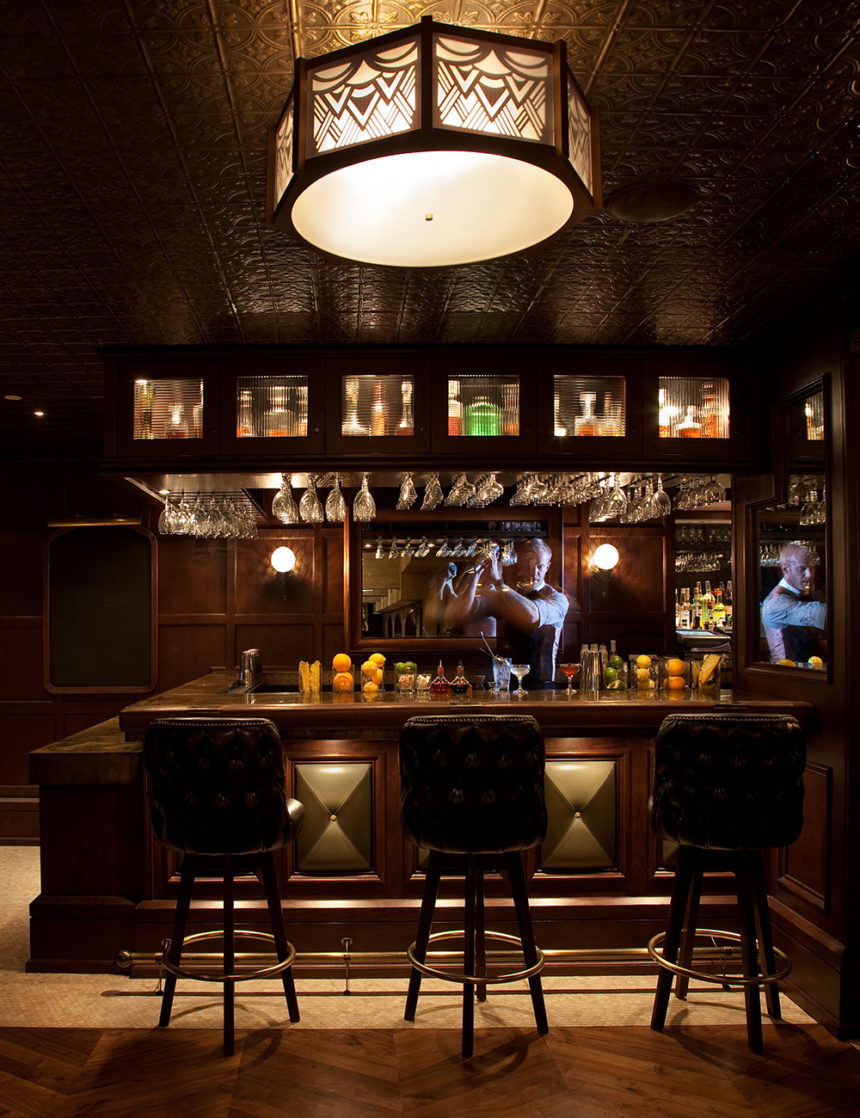 The flexibility has also made it a favorite “base” drink for variants. In fact, though it was created independently, the Mule falls firmly in the lineage of the “buck” drink: essentially ginger beer, a citrus, and a spirit. A spin-off called the Gin-Gin Mule, created by Audrey Saunders, one of the most influential of the modern mixologist savants, was named a “milestone drink” of the cocktail renaissance by Imbibe magazine.

“There are places I’ve been to that had at least eight different mules on their list,” Foss says. “It’s so simple that it doesn’t take a lot of creativity to embellish it.”

The Cock ‘n’ Bull closed in 1987. A different plaque, one commemorating the bar’s regulars, was taken to the also-now-shuttered Scandia and seems to be lost in the ever-changing landscape of the Sunset Strip. But the drink created out of the bar’s leftover stock has survived a Cold War, changing tastes, and one seriously awful novelty song-and-dance (search for the “Smirnoff Mule”).

“[The Mule] came back with the mixology wave, partly because they needed an easy vodka drink, but because of the ginger beer it’s got something going for it,” Wondrich says. “And it’s got a good story.”