Everything to Know About the Joshua Tree Music Festival 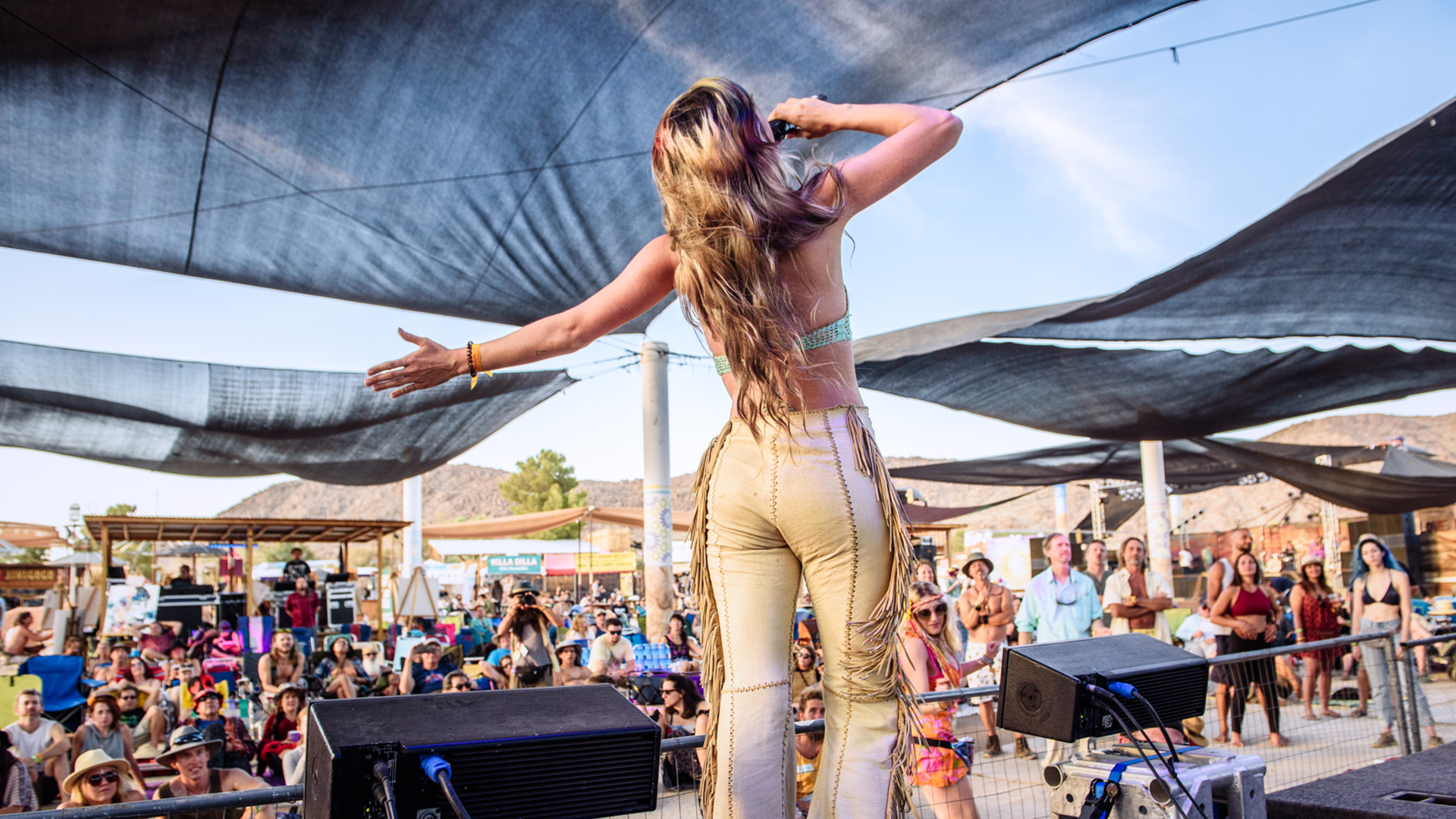 It might not have Beyoncé on stage or Leo DiCaprio in the crowd, but that’s just fine with fans of the Joshua Tree Music Festival, who show up for a lineup of indie international artists, culture, yoga, a family-friendly vibe, and the one aspect the festival prides itself on most: a sense of community. In another words, about as far from Coachella as you can get.

“No long lines, hectic crowds, or hustle and bustle,” says founder Barnett English. “Joyous connections and positive, shared experiences permeate the spirits and minds of our festival-goers because the size of the fest is not too great.”

Still, the little festival that could has been growing in popularity since it launched more than 15 years ago with 500 attendees. Today it takes place twice a year – with one four-day stint in spring and another in fall – at the Joshua Tree Lake Campground in the High Desert (about 45 minutes from Two Bunch Palms) and draws more than 4,000 people per weekend. English knows a thing or two about festivals – he’s brought his mobile organic espresso business Javagogo to more than 800 of them over the last 25 years – but actually organizing one wasn’t something he originally had in mind. After attending an event at the campground in the early 2000s, he mentioned to its owners that it seemed like the perfect venue for a music festival. “They said something like, ‘If it’s such a great idea, why don’t you do it?’ So, I moved to Joshua Tree and had the first Joshua Tree Music Festival there in April 2003,” English recounts. “I’d never lived in the desert, and never organized a festival before. Now I’ll never stop.”

The 13th annual fall festival takes place October 4 – 7 in the lakefront campground. Attendees can expect a lineup spread out over two stages featuring more than two dozen musical acts ranging from local desert musicians like Jessika Von Rabbit and Giselle Woo and the Night Owls to international acts including British electronic-dance group The Egg and Mali superstar Fatoumata Diawara. Music is certainly a major draw, but nearly as crucial is everything else that comes with the event: an artisan market, organic food purveyors, curated art throughout the grounds, and yoga classes that run from sun-up to sun-down. But the most unique aspect of the fest is the fact that organizers don’t just welcome pint-size patrons but go out of their way to make sure families have just as stellar of an experience as those without kids in tow. Children 10 and under get in for free while those 11 to 16 pay half price; a family camping area makes for built-in playmates and quieter afterhours; and there’s a full-on activity center in the middle of the festival grounds called Kidsville with a roster of puppet shows, dance classes, story times, and more.

Why be so family-friendly? “It makes for a better festival, and because I’m a dad,” admits English. “We’re all one big family, and even those that don’t have kids delight in seeing so many smiling young ones.” And while music festivals may have a reputation as a place to party hard and head home bleary-eyed and in need of a vacation, English insists that the idea of the JTMF is quite the opposite. “When people commune outdoors together soaking up potent live music, it’s real, palpable, and positive,” he explains. “You leave the festivals replenished, not depleted. That’s what we are all about.”

5 Fitness Finds in the Windy City