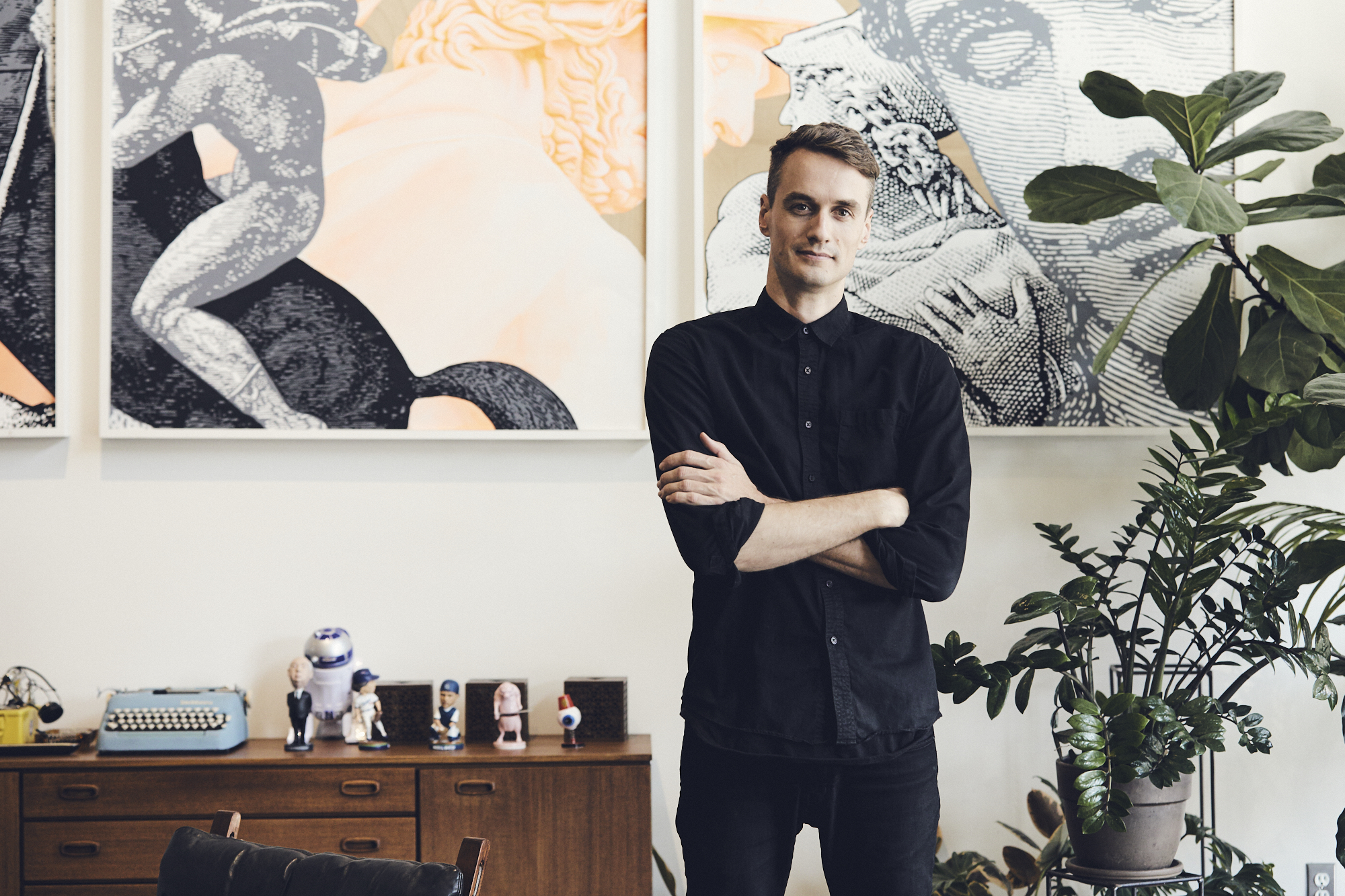 Drew Baker co-founded Funkhaus, the go-to creative agency for Hollywood’s biggest directors and production companies, indie media publications, top restaurant and hospitality venues, and art and film projects, in 2011 with co-founders David Funkhauser and Nick Dies. Since then they’ve established a client roster with serious street cred and show no signs of stopping.

We caught up with Drew to talk about why they set up shop in DTLA, how he stays creative, and where he travels to find inspiration.

Tell us about yourself.

I grew up in Melbourne, Australia and spent a lot of time snowboarding, surfing and playing basketball. Travel eventually brought me over to New York and LA, where I started working in the early days of cloud computing for hedge funds on Wall Street. I then went on to help my twin brother launch Pop, an Australian action sports youth magazine. After that, I was developing scripts for legendary HBO producer Gene Kelly.

When I met my co-founders David Funkhauser and Nick Dies, I was craving something more creative, I think we all were. So we launched Funkhaus in 2011 because there really wasn’t anyone challenging the notion of functional design very well in the creative industry. So we focused on building websites and digital strategies for clients that not only looked good, but also satisfied business goals and performance metrics. Since then we’ve worked with an amazing portfolio of film and entertainment, art, food and hospitality, media, and tech brands.

Funkhaus has had its head office in DTLA for 8 years. Why did you set up shop and stay in the neighbourhood?

Nick and I had both lived in New York and loved the city vibe of that place. Nick grew up on the east side of LA too. So when we first started thinking about launching Funkhaus, we had that mindset. Downtown LA was very different eight years ago – opening a business there was not something people advised us to do, but it reminded us a lot of the early days of Williamsburg, Brooklyn and we loved the vibe. Now, DTLA is extremely walkable, the architecture is amazing, and there is a ton of arts and culture on the eastside.

Tell me about some LA client work that you loved.

I remember the time we presented the designs for iconic filmmaker Ridley Scott’s new website for RSA Films. Ridley had grown up in the advertising world and was a very talented storyboard artist. He ended up showing us all these amazing storyboards of his from back in the day, and even had one of the neon umbrellas from Blade Runner to show us! Both Ridley and his son Jake wanted the RSA Films site to feel like a coffee table book, but obviously also wanted it to respect the cinematic nature of the work. So we tried to balance those two ideas by creating these bespoke print-style asymmetric layouts on the website and a theater-like atmosphere on a dark background when you watch a video on full screen.

What are your top 3 places to eat in LA?

The LA food scene has really exploded over the last few years and there are so many places I could list. My top three are: Gorilla Tacos, Jones Hollywood, and Speranza.

Snowboarding and surfing play a big part in your life. How do you think the sport has helped you with entrepreneurship and creativity?

I was a typical surfer kid growing up: I worked in a surf shop, listened to punk music, and had a strong distaste for “selling out”. The idea of staying true to who you are was important both back then and now, and represented how I wanted to live my life. If I had to analyze it, I think snowboarding and surfing require a high degree of self-reliance, which is something you need as a business owner. Perhaps confidence plays into it too, the more you commit to it, the better it will be.

Where is the best place to surf in California?
My philosophy on surfing in California is that I’d rather surf bad waves with no one else around, then good waves with crowds. So stay away from Malibu is the key!

What have you not worked on yet that you would love to?

I would love to get more involved in artificial intelligence and quantitative stock trading. Anything that involves applying technology to outsmart the competition is very interesting to me.