The Great Deep-Dish Debate: Where to Indulge in Chicago’s Most Iconic Food 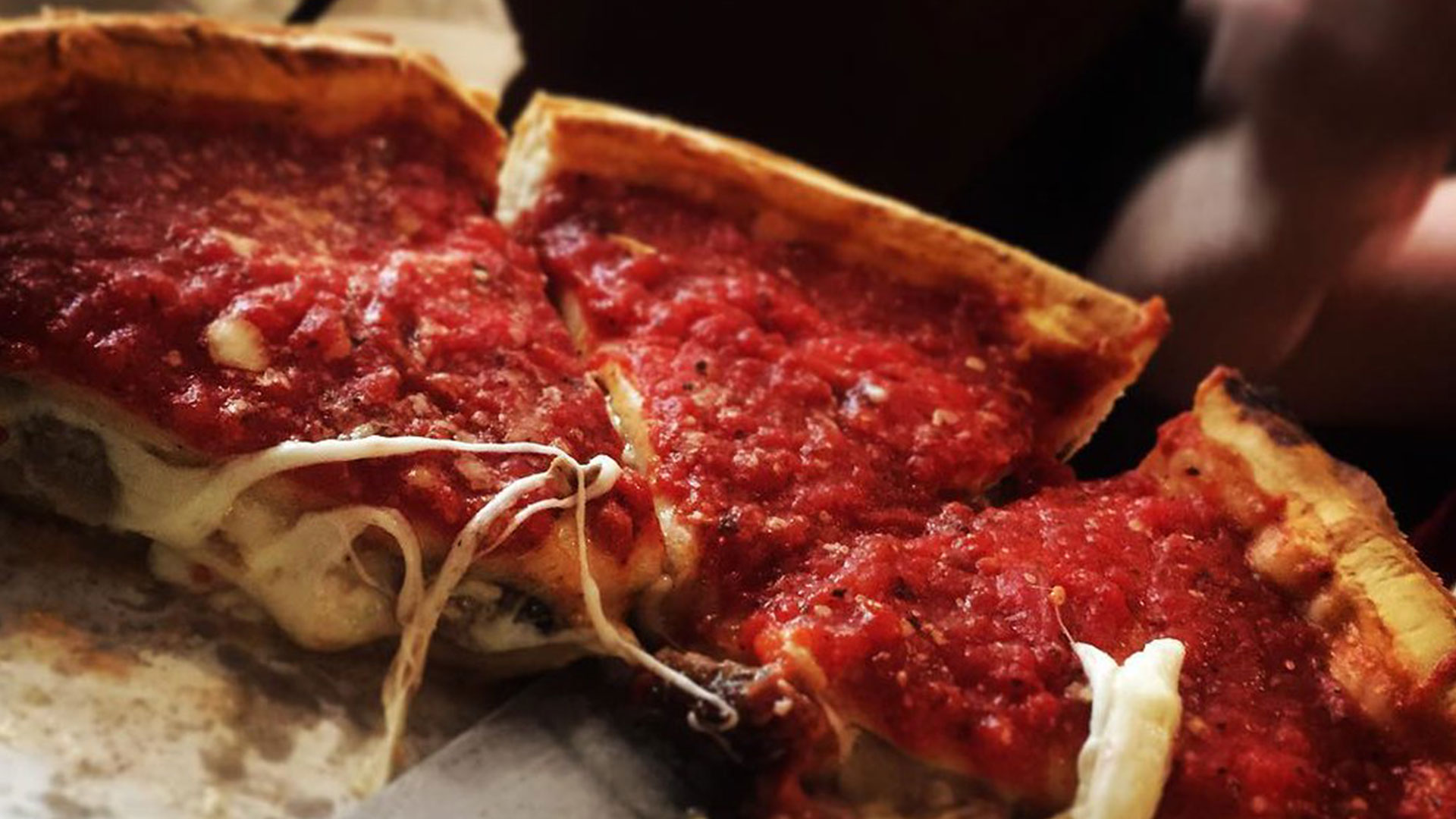 In the deep-dish mecca that is Chicago, there’s nothing quite like a piping hot pie presented on its very own pedestal, or the ever-satisfying cheese pull from pan to plate. These aren’t the thin, foldable pizza slices you’ll find in the heart of New York City — brimming with dough, cheese, and sauce, these Chi-Town classics are the knife-and-fork kind of business.

If you’re planning a visit to the Windy City, slicing into a thick, authentic deep-dish pizza is probably high on your agenda. But as for where to find Chicago’s top pie, that’s up for debate. Backed by reviews, reputation, and multi-generational recipes, the city’s top deep-dish establishments all stake a valid claim to “Chicago’s Best.” In fact, to determine the victor for yourself, you may just have to sample them all — and thankfully, that’s not an unreasonable prospect, given they’re all well within reach of Ambassador Chicago.

Every legendary dish has an origin story, and the tale of Chicago-style pizza begins in 1943 in the kitchen of a brick restaurant on the corner of Ohio Street and Wabash Avenue. It was allegedly here where deep-dish forefather Ike Sewell first decided to press his dough into a deep steel pan, creating a tall, pie-like edge to contain an unprecedented bounty of layered toppings.

Cooked in the oven for just under an hour, this bold, bubbling newcomer was a wild and instantaneous success with Chicagoans, sparking lines out the establishment’s door that have hardly dwindled for the past 77 years. Today, Uno’s continues to honor its artisan heritage as Chicago’s first deep-dish pizzeria while pairing its pies with the finest national, regional, and local craft beer selections, just one mile straight south from Ambassador Chicago.

According to Windy City folklore, there was another floured hand in the development of the original deep-dish recipe at Uno’s in the 1940s. The amiable “Grandpa” Lou Malnati, otherwise known as Uno’s pioneering pizza chef, is believed to have co-conceived the prototype with Sewell before branching off to open his titular family-owned venture in 1971.

Word of mouth was the driving force behind this humble Lincolnwood parlor’s rise to pizza-empire status. Ask any Lou’s-loving local, and they’ll likely tell you that the magic of this institution’s deep-dish specialty lies in its top-quality ingredients, just the same as back in the day. Keeping in line with family tradition, the sweet and tangy sauce comes from vine-ripened plum tomatoes that are hand-selected each year from California harvests. The raved-about sausage is infused with the pizzeria’s proprietary seasoning. The crust, which is thin, yet sturdy enough to support the pie’s heavy toppings, is a secret family recipe that is patted out by hand and baked for a pie that’s considered crunchier and yeastier than Lou’s competitive counterparts.

And then there’s the cheese. Your typical Lou’s deep-dish has three types of it, including a mozzarella that has been sourced from the same small dairy in Wisconsin for over 40 years for its singular flavor and texture. The blissful result is a pie that purveys crunch, cheese, and veggies in perfect harmony — a consistent achievement that has won over the hearts of the world’s most discerning deep-dish aficionados for 49 years and counting. Fortunately for those staying on the Gold Coast, Lou’s flagship parlor is centrally located in the neighborhood.

Some camps like their deep-dish traditional — others like it stuffed. And that’s where Giordano’s comes in. This long-loved establishment’s recipe for double-crusted, cheese-stuffed pizza has evolved over 200 years from its beginnings in the North Italy kitchen where Mama Giordano first crafted her “Italian Easter Pie” for special occasions. After her sons immigrated to America, they opened Giordano’s in 1974, introducing Mama’s masterpiece to Chicago’s south side.

Fast forward to present day, and the pizzeria has ascended to legendary status, pumping out pies in over 40 locations across Chicagoland and now tantamount to deep-dish in a city that’s famous for it. From the outside, a Giordano’s pizza resembles many other renditions found throughout the city limits, but slice into it, and you’ll see what makes this one different: a bona fide density of toppings and melted mozzarella oozing between layers of buttery crust.

While the pies here span from classic Chicago-style to enticing deep-dish spinoffs like bacon barbecue chicken, first-timers are sure to delight in a good old-fashioned sausage and pepperoni. (In one reviewer’s words: “It. Is. Everything.”) To devour one nearest the Gold Coast, head a half-mile south for the Giordano’s outpost on the Magnificent Mile.

You don’t mess with success, and that’s probably why the family formula for Gino’s classic deep-dish has remained largely unchanged since the pizzeria first opened its doors in 1966. A Chicago-style pizza pioneer in its own right, this city staple continues to rank among the city’s most elite deep-dish institutions. Like Lou’s, Gino’s puts a hyper-focus on the quality of their ingredients, whether it be the dough (made from protein-calibrated, unbleached flour), the tomatoes (fresh from the field), or the spiced sausage (sourced locally).

On top of the classics, Gino’s offers creative twists like a buffalo chicken pie and a pizza-burger hybrid with ground beef, dill pickles, French fries, and Thousand Island dressing. The restaurant’s newest invention, unveiled just last spring, has been christened The Cheesy Legend and features four distinct cheeses as well as a top crust of mozzarella sticks. From Ambassador Chicago, make your way south for its Magnificent Mile location, and be sure to bring a hefty appetite — there are no small sizes at Gino’s.

The 5 Best Slices in NYC for Pizza Lovers